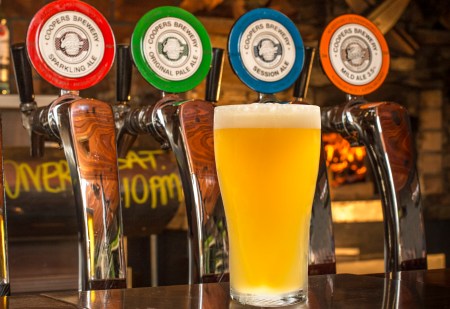 Coopers Brewery sold a record 83.8 million litres of beer last year, up by 2.9 per cent on the previous year and meaning the brewer has secured 24 consecutive years of growth.

“This marks 24 consecutive years of growth in beer volumes for a compound annual growth rate of 8.9 per cent,” Dr Cooper said.

Dr Cooper said sales growth during the year had been built on improved packaged beer sales.

“NSW is our strongest market, representing 27 per cent of total sales, compared with 22.9 per cent for our home state of South Australia, 18.7 per cent for Victoria and 16.2 per cent for Queensland,” he said.

New South Wales led the sales growth with sales up 6.9 per cent, Queensland up 5.5 per cent, Victoria up 3.5 per cent and Western Australia up 1.8 per cent. Sales in South Australia fell slightly.

Dr Cooper added: “Profit before tax of $33.4m was down 3.5 per cent from $34.6m in 2015-16, a result impacted by the final write-down of the goodwill and brand names of Mr Beer (USA), overhead costs associated with the construction of the new maltings plant and redundancy costs arising from a restructure as we reallocate resources to our growing interstate markets.”

The new $65m maltings plant to is set to officially open on 30 November and Dr Cooper said that it will immediately start contributing to earnings and that the company is aiming to achieve full utilisation of the plant over the next two financial years.

The maltings will be able to produce about 54,000 tonnes of malt a year, of which Coopers will use a little over 17,000 tonnes,” he said.

“The rest will be available for sale and Coopers already has signed contracts with customers in Australia and Asia.”