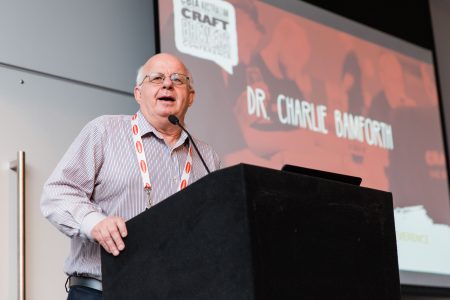 By Tam Allenby, reporting from the Australian Craft Brewers Conference

Professor Bamforth presented his opinion on a range of issues facing the brewing industry, from the importance of quality and consistency, his philosophy of ‘balance’ in a beer, and even his thoughts on the growing popularity of the purposely hazy New England IPA style.

But, it was his perspective on the ‘what makes craft’ debate that provided the main talking point from his address – a perspective that was not shared by Dr. Ina Verstl, beer academic and journalist, who spoke directly after Professor Bamforth.

“People have this word ‘craft’. To me, a craftsperson is somebody who is trained, and is able to do the job. Now in your homes, if you want to get in an electrician, you don’t want any old person to say ‘yeah sure, I can wire the house, no problem’ – they don’t know what they’re doing,” the renowned brewer, academic, teacher and author told the audience.

“And to me, the same thing applies in the world of brewing – you want people who are trained, know what they’re doing and are able to deliver. And whether you like it or not, you’ve got a far greater likelihood of finding those rigorously trained brewers, in larger brewing companies.

“What you’ll find in the craft area is that many of the growing craft brewers look to the bigger guys to recruit their brewers, because they know they’re well trained. And don’t kid yourself, some of these big brewing companies could make a hefeweizen meets Guinness with a touch of sourness thrown in, if they could market it and sell it enough.

“Craftspeople, in my opinion, are present in companies of all sizes, from the very biggest to the smallest. There’s many, many a craft brewer who has learned from the big guys – but when it gets nasty is when it comes to sales and marketing.” 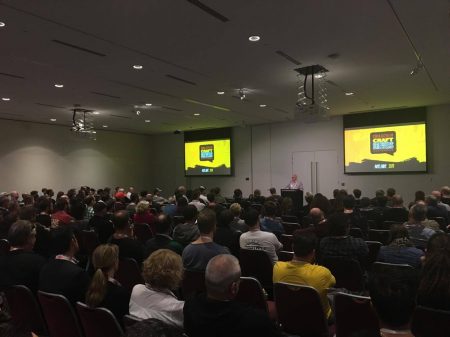 Dr. Ina Verstl, editor of Brauwelt International and co-author of the book The Beer Monopoly, explained to the audience that to her, the ‘craft’ debate boils down to ownership and independence – in contrast to Bamforth’s ‘craftsmanship’ take.

“When it comes to motivations, strategies, ways of doing business, and reasons for doing business, we need to talk about two different classes of brewers: the independents and the big brewers,” Verstl said. “I would like there not to be a rift, and far more sharing, but business-wise there is no sharing.

“When you break down the dualisms of craft beer vs big beer down to their core – big vs small, local vs global – at their core is ownership. Ownership is central to what craft beer is. And craft beer is a political act, producing it, drinking it is one.

“The consumer makes a political choice – whether he’s fully aware of it, thinking ‘I only buy independent beer, I don’t support conglomerates’, or whether he just wants to support the guy with the brewery down the end of the road.”

Dr. Verstl also said that by developing an ‘indie’ seal and emblazoning it on their products, Australia’s independent brewers could differentiate their beers from those produced by ‘Big Beer’.

This would enable consumers to readily identify between beers produced by small independent brewers and larger corporate produced beers, and would reflect what is already happening in the US where the US Brewers Association has developed its own independent seal.

Prior to Verstl’s presentation, Bamforth also weighed in on the recent series of acquisitions of smaller brewing companies by multinationals such as AB InBev and Molson Coors in the US, saying that the main concern is transparency.

Regardless of where you might sit in this debate, the take-home message from Bamforth for the brewers at the conference was a simple one: “People and quality,” are the key ingredients, and “if you look after your people, they will ensure the quality of your product.”