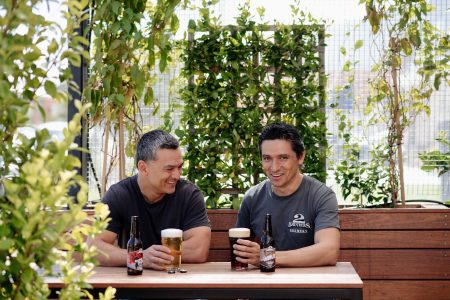 In June, 2 Brothers Brewery passed a massive milestone in the history of any craft brewery: its 1000th batch. Now in its 10th year of operations, and having undergone a branding overhaul earlier in 2017 – followed by a stellar showing at the AIBAs – it’s certainly been a big year for the brewery in , Victoria.

Founded in 2007 by Andrew Ong and his brother David, 2 Brothers was the first craft brewery in Melbourne’s south-east – an area that’s now home to a swathe of them.

While chatting with Beer & Brewer, Andrew Ong reflected on the decade that’s passed, explaining what it was like entering the market in 2007 and how the domestic craft beer market has changed in that time.

“When we started, we were really converting people hand-by-hand, conversation-by-conversation,” Ong said. “Most people that walked into the beer hall at our brewery had no idea that you could make beer in a small brewery and they had no idea of what to expect in terms of flavour. Most people were pretty sceptical and I don’t blame them for being so, it was just totally new.

“Basically we were converting people one at a time… it was one of those cases where you tell one person, if you do a good job they’ll tell two people, two will tell four and so on. So we just sort of slowly grew a small fan base down here in the south-east and converted people over from a long drinking history of domestic, mainstream beer.”

But times have changed: the Ong brothers enjoyed a stellar showing at the 2017 AIBAs, taking out trophies for Pay Day (Best Australian Style Pale Ale) and Happiness (Best Reduced or Low Alcohol Beer), as well as a gold medal for their Grizz American Amber.

“We were pretty stunned, and I’m sure all of us brewers are trying hard, but to win those awards you need not only a good beer but a bit of good luck as well. So one would’ve been terrific, but three gold and a couple of trophies – we never, never expected that,” Ong told Beer & Brewer. 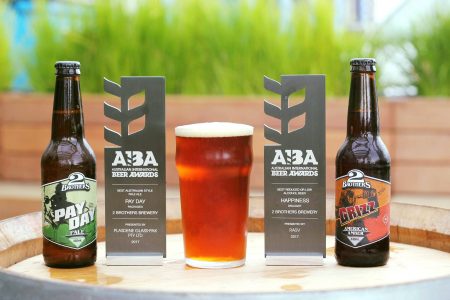 Batch number 1000 happened to be one of these award-winning beers – Pay Day – and the milestone was marked with the release of a festival beer, Smoking Jacket, brewed for GABS, as well as a local event at the Moorrabin Beer Hall.

Earlier on in the year, 2 Brothers underwent a brand redesign that rejuvenated the tap decals and bottles, bringing the range of beers together under the one umbrella. As Ong sees it, it was time for a change.

“We’re really pleased with the way they turned out and it certainly brought the group of products back into becoming a family, and it’s also brought our 2 brothers brand forward a little more, which is going to be really useful going forward,” Ong said.

“It’s almost an impossible challenge trying to make something that looks unique, but so each bottle is similar with one another, because those two things kind of fight each other. The more unique you make each product, the less sort of common DNA they share so it’s a matter of finding the right balance – it wasn’t an easy won battle but our designers did a terrific job.”

The team at 2 Brothers still brew using a system recovered from a bankruptcy in New York. When they were starting out, Ong says “it was definitely a larger system than we needed”, but three or four years into operations they started running out of capacity and they’ve incrementally added to this original brewing system as demand has required.

When asked for the key to success and longevity in the market, Ong says that for 2 Brothers it’s really all about quality and continuity.

“I guess small breweries range in their aspirations from being single batch, different style every week, really exploring and covering the map and the fabric of beer types – whereas we’ve always gone about things from the beginning investing a lot of time into producing and curating a very small core range,” he explains.

“As well as being interesting and engaging, and offering the consumer something unique, our beers also needed to be really palatable, highly sessionable and generally approachable to a really wide audience. And we’ve continued to do that – some of the products in our core range have been around for 10 years, and we tend to invest the time in what we think is both a product and a brand that will stick.” 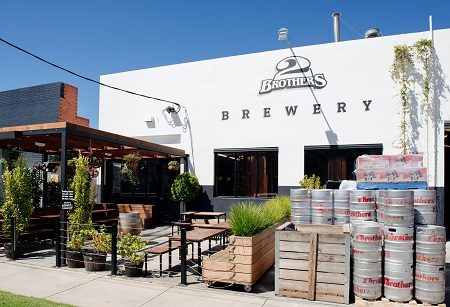 With 10 years under his belt, Ong has also been witness to the craft beer boom in Australia. And while that has undoubtedly been a positive in terms of bringing local, full-flavoured beer to the consumer, the sustainability of the sheer amount of different breweries in the market in 2017 is up for debate.

“Nowadays it’s quite different because there’s a blinding array of different brands and different beer styles available in anything from the bespoke bottle shop to more mainstream ones,” said Ong.

“I actually feel sorry for the consumer in a way because at this point there’s maybe a little too much choice if anything! I wonder if they know where to start, certainly someone coming in new to the craft scene.”

Crossing into the next decade, does Ong have plans for another 10 years of 2 Brothers?

“I can tell you that the landscape of craft beer has shifted so rapidly even in the last three years that it’s a little hard to know what’s happening around the corner – so to be honest, 10 years is a heck of a long way out, but we’re really looking forward to the future and excited about what we’re doing and what’s to come,” he says.

“We’ve never had world domination plans. Dave and I have always been in this for the ride and for the love of it.”