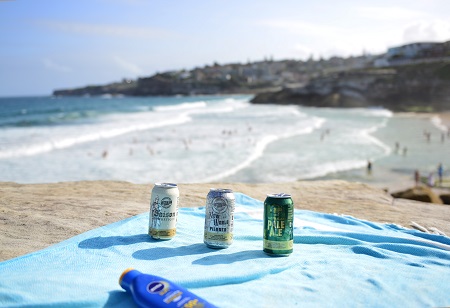 The Australian Brewery has landed in the US, launching with three of its signature canned beers: The Saison D’Heretique, New World Pilsner and the Pale Ale.

It’s been a huge six months of growth for The Australian Brewery, with the brewers now exporting to seven countries including India, Canada, Japan, Singapore, Hong Kong, Abu Dhabi and the US, and they are also eyeing the UK and Greater China.

In order to meet the increasing demand the brewery will be expanding in the coming weeks, adding a new canning line and increasing its fermentation capacity. What is currently a two vessel brewhouse will become a three or four vessel brewhouse.

David Ward, the marketing manager at Australian Brewery told Beer & Brewer that “we’re having all those plans come in this week and we will be ordering what we need to expand the brewery within the next two weeks”.

Ward said that “it’s been a crazy six months for us in terms of growth”.

And while Ward says that they are also eyeing the UK market, he said that at the moment China and the US are their main areas of focus.

“We’re eyeing the UK but to be honest China and America are such big markets that there is so much potential to grow in each of those that our focus now is more on making sure that we can fulfil our potential in those places,” said Ward.

The US deal was secured in March last year when the Australian Brewery team went to New York for a trade tasting and met California-based second generation beer and wine importer Kyle Morandell.

After facing some regulatory hurdles around labelling the first 20 foot container has finally landed and according to Ward the beers have been very well received so far.

“Morandell was initially sold on us based on the Pale Ale which he loved and believed there was a good market for in America,” explained Ward.

While the Saison is only a limited release brew in Australia the team decided to launch it in the US because of how well it was received at the trade tasting.

“It is a very popular style in America at the moment and at the tasting people were falling over their feet when they tried it, so we couldn’t not send it.

“I think for it to be a volume beer in Australia is still a few years away, so we’ll keep it in America for now until the Australian market is ready to accept it,” said Ward.

“The Pilsner was the beer that I pretty much insisted that he take. It is so good and it’s in such a striking looking can that I thought it would make a good mix with the Saison and the Pale Ale.”

Australian Brewery along with Kaiju from Melbourne and Nail Brewing from Perth have also just returned from their craft beer showcase and tour around China, which Ward said was a successful trip.

“It went really well. Everyone’s beers were well received and there was heaps of interest, so now it is just about choosing the right partners,” he said.