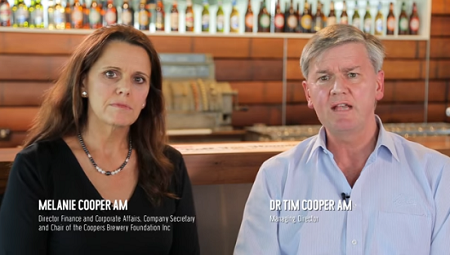 Coopers Brewery has apologised for the offence caused by its recent involvement with the Bible Society and has said that it supports marriage equality.

The Brewery was speaking after the social media backlash over a video about marriage equality saw several venues saying they would no longer stock Coopers’ products. In response Coopers has issued a statement from Managing Director Dr Tim Cooper and Director of Corporate Affairs, Melanie Cooper, saying that it was withdrawing its Bible Society commemorative cans and that it would be joining Australian Marriage Equality.

“On behalf of the Coopers Board and senior staff, we are incredibly saddened by the impact our involvement with the Bible Society has had on our valued Coopers drinkers and our extended family,” Dr Cooper said.

He added: “As a longstanding philanthropic company, Coopers Brewery has been passionate about supporting all aspects of our community, and has actively and financially embraced many different organisations.

“Our company’s guiding principles have centred around respect for others, and, as such, the recent activity surrounding the video made by the Bible Society has conflicted with our core values. Coopers never intended to make light of such an important issue, and would never and did not approve the making or release of the Bible Society video ‘debate’.”

Melanie Cooper said Coopers Brewery was and had always been supportive of diversity and encourages individualism.

“Offence has been taken by our recent involvement, for which we are deeply sorry. We have listened to a range of community views, we acknowledge this feedback and respect everyone’s individual opinions and beliefs.

“We have consequently cancelled the release of our Bible Society commemorative cans and will be taking steps to show our further support for our community, including joining Australian Marriage Equality.

“Our company brews great beer that we are passionate about, and we warmly embrace all Australians.”

So far the reaction to the statement seems to have been largely positive, with Victoria’s 2017 Young Australian of the Year and LGBTI and mental health advocate, Jason Ball, thanking the brewer for its new found support of marriage equality and saying he was willing to take the apology at face value.