Redline Taphouse & Kitchen has opened at the Tramsheds in the inner-Sydney suburb of Forest Lodge, bringing a slice of the USA Down Under.

The venue is the latest venture by chef Joe Slakey – the man behind nearby Glebe favourite Flying Fajita Sisters, a lively Mexican cantina – and occupies the space that once housed Sir Chapel Bistro & Brewery.

Redline Taphouse features a ten-tap lineup of beers; six are rotating guest brews from local craft breweries, while the remaining four are Slakey’s own, brewed using the SmartBrew system on site.

“Our first two brews are a Mississippi Ale and a South Pacific Lager – adding to our house lager which we currently have on pour,” Slakey explains. “Next off the line will be a pilsner and something darker, maybe an amber ale.”

And it won’t stop there: “We have loads of ideas for seasonal releases and nice little tweaks that tie back to our Americana theme, including the use of bourbon barrels, etc.” 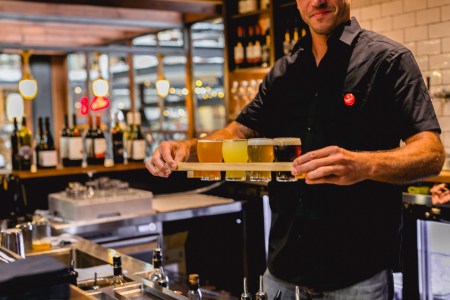 With a background in homebrewing, Slakey says that he’s been studying a number of styles over the years – which he’s excited to pour at the Taphouse – and is also aiming to one day offer Redline cans, as well as growler and squealer refills. However, it’s the beers from the surrounding breweries that Slakey says are the focus.

“We see ourselves as a platform to showcase the awesome brewers in Sydney and NSW first and foremost, adding our own branded microbrews and the odd interstate and overseas guests into the mix to give customers the opportunity to try lots of different styles.

“We’re very passionate about the Inner West beer scene in Sydney – it’s really unique and probably the best opportunity in Australia to access so many incredible beers in a small area.” 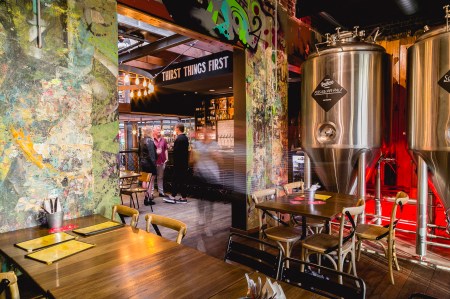 The food offering at Redline is boldly Americana, including classics from both the Deep South and New England: succotash, jambalaya and hush puppies line up next to more familiar dishes, all inspired by Slakey’s travels around the US.

“I’m really excited to see Sydney’s reaction to our food,” says Slakey. “As a chef, you always want to be able to serve up the dishes you enjoy the most and opening Redline is an opportunity to do that.

“Many Aussies will have heard of these dishes, like hush puppies and succotash, but a lot may never have ever actually seen them or know what’s actually in them. It’s real, down to earth American food and we think people will love it.

“When we decided to open a new venue I wanted to focus on real Americana – classic regional food and great craft beer. It’s a core part of American culture and we saw Redline as a way of bringing this to life and showing Sydney a new concept, backed up by the best local beer available.

“Combining my two great passions of good beer and real American food is the ultimate dream for me.”