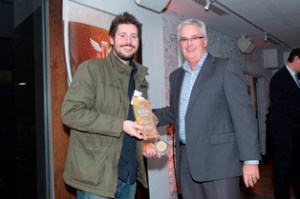 Craft breweryBarossa Valley Brewing has taken out top honours at the 2014 Royal Adelaide Beer Awards, winning the Most Outstanding Beer in Show trophy for its India Pale Ale ‘Canis Majoris’.

The super-strong beer, which has an alcohol level of 8 per cent, was also named Champion India Pale Ale and Champion South Australian Exhibit. The Tanunda-based brewery, established by former investment banker Denham D’Silva named the beer after one of the largest known stars in the universe, Canis Majoris.

Other trophy winners included Western Australia’s Nail Brewing, which took out the Champion Small Brewery and Publican’s Choice Award – a new class judged by a panel of Adelaide publicans – for its Nail Imperial Porter.

Nail Brewing was also one of two winners in the Champion Porter class, with its Nail Hugh Dunn Brown sharing top honours with McLaren Vale’sGoodieson Brewery for their Goodieson Brown Ale.

“It’s a great honour winning gold and even a greater honour to get Hugh Dunn’s name on the trophy. Hugh has been a mentor for myself for many years as he has for most of Western Australia’s young brewers,” said Nail brewer John Stallwood.

The Chief Judges Award – awarded to the beer exhibit which achieves the most improved score on the previous year – was awarded toWest End Brewery for its Hahn Superdry.

Chief beer judge Simon Fahey said the number of entries had increased substantially on the previous year, with 152 entries judged over two days with each entry judged in reference to specific beer style guidelines.