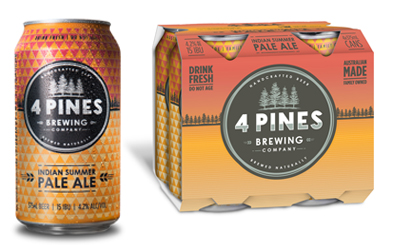 4 Pines has added a sixth beer to its core range and its first in a can, with the launch of Indian Summer Pale Ale.

Indian Summer Pale Ale carries a 4.2 per cent ABV and 15 IBUs and is ‘crisp and light in bitterness with aromas of passionfruit and honeydew,’ according to 4 Pines.

A labour of love for the brewers over the last few years, Indian Summer Pale Ale has been tweaked and perfected until it could hold its head high among the brewery’s existing core range – Kolsch, Hefeweizen, Pale Ale, Stout and E.S.B.

“After several years of tinkering away in the Manly brewpub with our Indian Summer Pale Ale recipe and bringing it out in various small batch Keller Door releases, our local customers made it pretty clear to us it was time to stick it in a can so they could take it with them,” said 4 Pines’ Jaron Mitchell.

“Why in a can? As well as frequenting our brewpub – where all our beers are born – our customers as well as ourselves also like drinking at ‘The Office’ on stinking hot days between October and April. ‘The Office’ is a cult location right next door to us in Manly; a 200m or so grass strip, perched on the harbour, where just about everyone locally frequents for a barbeque, picnic or long afternoon of drinking beers in the sun.”

Indian Summer Pale Ale is available in a four-pack, carton and individually from leading bottle shops around the country. It carries a RRP: $14.99 per four-pack (375ml).