By ashailer on November 18, 2015 in Beer & Breweries, Brewer Interviews, Breweries

“It feels amazing to have a space that we can customise to our workflow. The big beers we are known for require careful consideration meaning our equipment needs to be up to the task of removing copious amounts of hops!” Callum Reeves from KAIJU! Beer told Beer & Brewer.

Exit Brewing’s Fraser Rettie was equally excited about the flexibility and efficiency the new brewery offers them.

“It’s happened so quickly and there is still a lot of work to be done going forward, but it’s fantastic to have a bit of space that we can say ‘this is where we are based’ and having better equipment and larger capacity to brew gives us a lot more flexibility, efficiency  and should improve the quality of our product. It will also give us the chance to create a regular range of Exit beers,” Rettie explained.

Both started brewing last month, with KAIJU! putting its lightest beer Robohop through the tanks first to see how it would handle the hop loads, while Exit brewed a new beer #012.

“We brewed the first Exit beer in the new brewery on 26 October for all those trivia buffs out there.  The first beer (#012) is still in the tank and will be a hoppy Pale Ale when we finally package it,” said Rettie.

The idea of pooling resources to open a brewery together came about when both brewers shared tanks at Cavalier and became friends.

“We found ourselves spending more time with the Exit boys outside of the brewery than in it, talking about beery ideas and ideals,” explained Reeves.

“One day we asked them, ‘Do you want to be best friends?’. Like eight-year-olds in the school yard, we were hoping they’d say yes and that maybe, just maybe they’d think we were cool. Fortunately they said yes. We assumed that means they think we’re cool.”

The new brewhouse is 2,500L, with five x 5,000L fermenters (two for Exit and three for KAIJU!), a steam jacketed mash/kettle, a 5,000L bright beer tank and a 14,000L blending tank for KAIJU!’s cider, Golden Axe Cider. For packaging there is an 1,800 bottle an hour bottling line and a keg cleaner/filler that will do 15 kegs an hour.

“The single greatest thing of all is the bottling line. The reduction in manual labour from what we have been used to is huge and should enable me to actually get out of bed the day after without hobbling around like a 138-year-old man,” said Rettie. 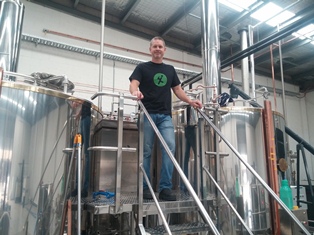 Exit Brewing’s Craig Knight, aka Grum, at the helm of the new brewery

There are no plans for a cellar door at the brewery due to its location, however the brewers will hold special events there.

“The location of the brewery doesn’t really lend itself too well to a cellar door and licensing requirements would make it quite difficult, but we are planning a great collaborative event for GBW 2016 with KAIJU! and our good mates the Terminus in Fitzroy North, which should be a fantastic day out for people. I’d definitely go myself even if I wasn’t already going to be there,” said Rettie.

More collaboration beers between KAIJU! and Exit are definitely on the cards, with the partnership announced with the launch of the third version of Schopsh a hoppy scotch ale.

“It was the first time we had made a full commercial batch, the last two were only single kegs. Each version of Schopsh has been a bit different, it was a fun way for us all to play with different varieties of hops and different levels of peaty smoky goodness,” explained Reeves.

“Pretty sure we’d like to see this become a regular beer, maybe an annual release that has an added twist every year!”