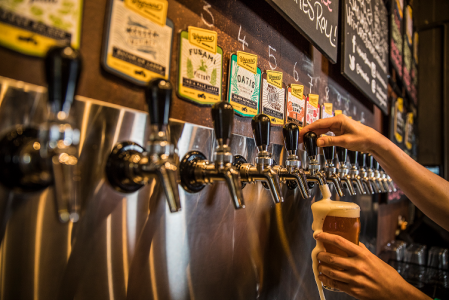 Wayward Brewing Co. will transform its Camperdown brewery and cellar bar for two separate events over the next six weeks, starting with ‘Summer Luau’ on 24 February and ‘Destination Unknown’ on 28 March.

Summer Luau will see Wayward’s cellar turned into a Tiki paradise of palms, flowers and pineapples, with live music from surf rockers The Van Demons and free Mai Tais from 12pm (while supplies last).

Faye White, Creative Director & Marketing Manager at Wayward, told Beer & Brewer that the idea for the Tiki event was born out of Funky Pineapple being brewed again.

“It’s a bit of fun too, you might not necessarily associate a Tiki theme with lots of beer drinking so we thought we’d give them a cocktail option as well,” she said.

Destination Unknown, taking place in late March, will see guests being issued with a ‘beer passport’ on arrival; from there, they’ll be taken on a paired beer and food tasting journey.

“The idea for that event is to explore the travel ethos of the brand, and give people a bit more insight into that and the Wayward personality. The idea of making it secret is also quite exciting,” White said.

The line-up of brews on the night will also feature a “never-before-seen” beer specifically brewed to tie in with the theme. When asked for a hint as to the identity of the secret beer, White’s lips remained firmly sealed.

“I can’t because it really could give the theme away! It’s something completely new for us though – when Shaun [Blissett] our Head Brewer mentioned it… I told him a country, and he went away and had a think about it, and came back to me with something completely left-field, and not what I was thinking at all, but it sounds absolutely delicious.”

White also hopes to see Destination Unknown and Summer Luau kick off a big year for Wayward in 2018 – with these two events only the beginning of a stacked calendar.

“The cellar bar has been pretty successful in the past year and we’ve won some awards – and got on to Time Out’s recommended list which was awesome – and we just want to keep that up and give our locals and regulars some fun events to come to, and also bring some new faces into the brewery as well.”

Tickets for Destination Unknown can be purchased here.