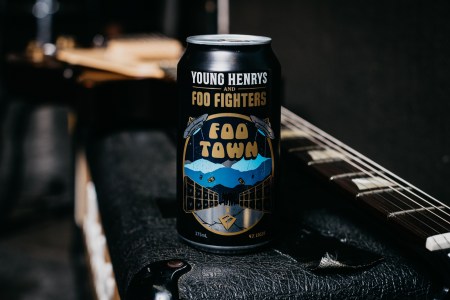 The beer will be available at Foo Fighters pop-up bars in Sydney and Melbourne over the coming weeks. As well as featuring the new beer the bars will also give fans the opportunity to listen to the band’s new album.

Young Henrys co-founder Oscar McMahon said, “Getting a call to say the Foo Fighters want to brew a beer with Young Henrys was huge for us. We’re also stoked for our mates DZ Deathrays, who are joining them on tour again. It’s thanks to working with local legends like them that we’ve got the opportunity to brew a beer with one of the world’s best known rock bands.”

The Foo Town lager is described as an Australian hazy lager which is light gold in colour with a light hop aroma and low to mid bitterness.

The pop-up bars will be at the Hollywood Hotel in Sydney from 24-27 January and then at Melbourne’s Cherry Bar from 27 to 30 January.

Young Henrys has said that following the takeovers a limited number of cans will be available through national bottle shop retailers and the brewer’s website.