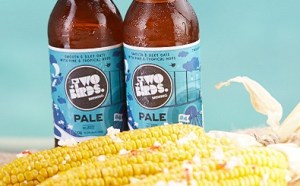 The team behind Two Birds Brewing, Danielle Allen and Jayne Lewis, have celebrated their recent brewery expansion with the release of a new Pale Ale.

PALE is a five per cent ABV, 28 IBU Pale Ale with additional oats, which Allen told Beer & Brewer, help to bring a roundness to the beer.

We’ve gone for a New World-style pale and to us that means super-pale in colour and it’s hazy from the addition of flaked and Golden Naked oats, which are the two different types of oats in there,” said Allen.

“The reason we added the oats is because they give the beer a nice smoothness and roundness. Then in terms of hops we’ve got Amarillo, Australian Cascade and Mosaic and those have given the beer nice pine and tropical notes. So that’s the kind of beer we were trying to make.”

After releasing the Oaty McOatface Pale Ale as a limited edition beer last year, the pair tweaked the recipe for PALE, as Allen explained.

“We were getting a lot of request to do a Pale Ale coming through and we kind of dipped our toe in the water last year and tried it out as a speciality. So this is a slightly tweaked version of the Oaty McOatface beer that we did towards the end of last year.

She added: “The joy of having our own Tap-Room is that we get direct feedback from the public as to how a beer is perceived, how it sells and what people think of it. So from Oat McOatface, we’ve actually increased the percentage of oats, increased the hopping and also changed around the hops that we used. We got to see how it turned out, and then worked on the characters that we wanted to keep and the other characters that we wanted in there.”

And with a portfolio of core beers that includes a Golden Ale, Amber Ale and the Taco Beer, Allen told Beer & Brewer that she feels PALE is a perfect fit for Two Birds.

“We started with a Golden Ale and that we did that because there were so many Pale Ales around at that time, this was five years ago, so we wanted to stand apart from the crowd and have better chance of securing taps and shelf space if we had something that was slightly different and at the time, that was a bit of a niche style. We do like to be a bit different.

“So we’ve got the Golden, which is obviously our star performer and we continue to love adore and drink every day. Next up came the Sunset, which is an Amber Ale, which were around but not as popular as they are today. So the Pale complements the range in the sense that Pales are something our customers continuously ask for and we’ve recognised that and this a really good rounding out to our range, our target market and our drinkers and where we see ourselves fitting into the craft scene.”

The brewery expansion recently completed by Two Birds has seen the addition of a 12-head bottling line at the brewery, which allows the company to both bottle and keg its beers now. Allen added that they will be doing both with PALE, as they look to push the beer in both the on- and off-premise.

“We don’t have any exclusive plans at all. But of course we have to build up, so first of all it will start to trickle through our independent customers in New South Wales and Victoria. That includes both on-premise taps and bottleshops and then hopefully it grows in demand from there,” Allen said.

And with the brewery expansion now complete Allen told Beer & Brewer that Two Birds is now really looking forward to a bumper year.

“This year is a real pinnacle moment for us as we have our own bottling line and we have our own brewery, so hopefully it is a case of watch this space. We have got so many exciting beers to make and we just continually work hard to get that beer out to as many people as we can and just educate them about beer and the wonders of it.”

Two Birds PALE will be available from bottle shops and on tap nationally from today, retailing at $21.99 for a six-pack. The launch heralds a revamped look and feel for the Two Birds brand, with each of the core ranges featuring new look illustrations that depict its origins and flavour profile. The full roll-out will take place throughout 2017.