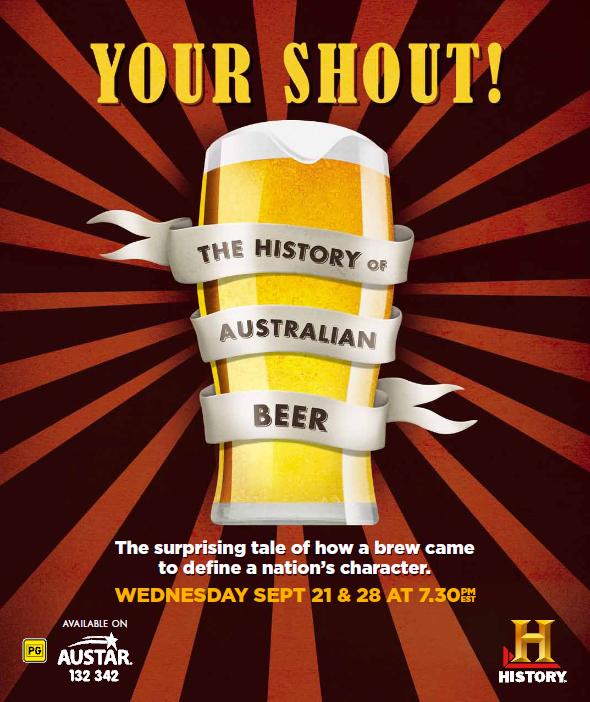 YOUR SHOUT! The History of Australian Beer, hosted by MIKE GIBSON, premieres on The History Channel on Wednesday, September 21 and 28 at 7.30pm AEST and offers a definitive and very entertaining history of beer in Australia.

More than any other ritual in the past 200 years, two people sharing a beer has defined the Australian character. It has brought us together in pubs and at sporting events, quenched our thirst, encouraged friendships and is a great reward after a hard day’s work.

The two-part series traces the development of Australia’s most familiar beer brands, including Fosters, XXXX, Coopers, VB, West End and Swan and examines how regional variations in beers developed around the nation.

YOUR SHOUT also tells some of Australia’s most colourful stories and yarns about the men and women who have served beer in Australia’s public houses in both the cities and in the outback – and takes a look at some of our best-known beer-drinking rituals, including the age-old tradition of the ‘shout’.

As far back as Captain James Cook’s first charting of the East Coast of Australia, beer has played a central role in Australia’s history, with Cook actually brewing beer on his voyage in 1770 to sterilize the ship’s fetid drinking water. And while home brewing was the norm for many early settlers, the brewing of beer soon became one of Australia’s major industries and established some of the nation’s great family fortunes.

Featuring interviews with historians as well as footage from some of this country’s best-known beer advertising campaigns, from early pub art through to the more recent high-end television commercials, YOUR SHOUT is the definitive look at our beloved amber nectar.

YOUR SHOUT: The History of Australian Beer is a Graham McNeice Production, exclusive to The History Channel.

About The History Channel

The History Channel is Australia’s only television channel dedicated to history 24 hours a day, 7 days a week. It is part of a global, award-winning network with access to a vast library of the world’s best historical programming. The History Channel brand is licensed exclusively by FOXTEL Management Pty Ltd from A&E Television Networks International and 100% produced, programmed, broadcast and controlled locally. The History Channel is available on FOXTEL, AUSTAR and OPTUS TV platforms.

FOXTEL is Australia’s leading subscription television provider and is connected to over 1.65 million homes on cable and satellite through retail and wholesale distribution. FOXTEL strives to ensure subscribers find TV they want to watch every time they switch on through delivery of more than 200 channels covering news, sport, general entertainment, movies, documentaries, music and children’s programming. FOXTEL is owned by Telstra Corporation Ltd (50%), The News Corporation Ltd (25%), and Consolidated Media Holdings Ltd (25%).