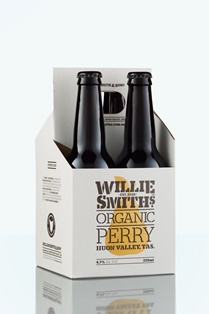 The crew from the Huon Valley cidery have been experimenting with perry using customer feedback from the Apple Shed cellar door to tweak the perry before deciding it was ready to bottle.

“The original idea for doing a perry came from an orchardist just down the road in Cygnet, who had a bunch of pears left over that he couldn’t sell,” explains Reid.

“We picked them and then fermented them with a Champagne yeast and were initially a little unsure about the product. Not knowing what to do with it, we left it in the cool room to round out and develop a more complex flavour.

“When we opened the Apple Shed we put the perry on tap and over time we have been changing and evolving it. Last season we got hold of some organic Beurre Bosc pears and have continued to tweak the product until we got it to a place where the feedback on tap has been so good that we have decided to bottle it.”

The Willie Smith’s Perry will be available nationally (excluding NT and WA) in bottles and on tap.

Reid said it was exciting to be launching a new product just two years after the business first began.