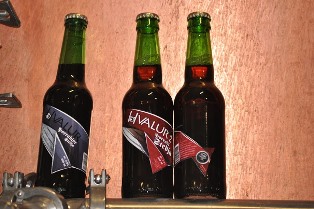 Icelandic microbrewery Steðji has angered conservationists by launching a beer made from the testicles of endangered fin whales for the country’s mid-winter festival Thorri, which starts next week.

According to the brewery’s website, the Hvalur 2 beer, which is 5.2% ABV, is made from pure Icelandic water, malted barley, hops and “sheep sh**-smoked whale balls” .

“Icelanders have used this method of smoking for centuries, so we chose to handle the whale balls the same way before we use it in the brew. Because of a lack of trees in Iceland, we use dry sheep sh** to smoke. This gives the beer an excellent smoke taste, a smoke taste you haven’t tried out before. The balls also give their flavour to the beer,” the website states.

Shockingly, this is not the first whale-flavoured beer from the brewery. Last year it launched Hvalur beer, brewed with milled whale bones, again incurring the wrath of conservationists.

Environmental group Whale and Dolphin Conservation (WDC) condemned last year’s beer, telling the Guardian that “reducing a beautiful, sentient whale to an ingredient on the side of a beer bottle is about as immoral and outrageous as it is possible to get.

“The brewery may claim that this is just a novelty product with a short shelf life, but what price the life of an endangered whale which might have lived to be 90 years?”

The brewers dispute that fin whales are endangered, telling trade journal Beverage Daily, “actually, we don’t consider the fin whale to be an endangered species here in the North Atlantic. We have a fisheries system in Iceland that is really self-sustainable and responsible.”