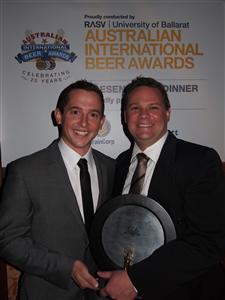 The 20th annual Australian International Beer Awards has named Western Australia’s Feral Brewing as Champion Large Australian Brewery for 2012. While he was bemused by the title Large Brewery, head brewer Brendan Varis was delighted to accept the award. Thanking his partner, William, and his wife in particular he then went on to congratulate the Australian craft brewing industry in general. Feral also took home the awards for Best International Pale Ale for the third consecutive year and Best Scotch & Barley Wine, as well as some other gold medals.

The Awards Presentation Dinner, conducted annually by the Royal Agricultural Society of Victoria (RASV) in conjunction with the University of Ballarat, showcases premium beer and brewing excellence in the Asia Pacific region. In all 18 Trophies were presented with 10 awarded to international breweries and eight awarded to Australians.

AIBA Committee Chairman and Chief Judge, Peter Manders, said the Awards draws international recognition from the beer industry and showcases the commitment to excellence from brewers.

“Now in its 20th year, the AIBA continues to attract a remarkable number of high calibre entries from Australian and international breweries, with a record 1,344 brews entered from 41 countries this year, an increase of 10 per cent on last year’s,” Mr Manders said. “The AIBA welcomed 52 judges, all of whom were awed by the quality of entries. Each year sees standards continually improve as brewers push for excellence and exceed all expectations.”