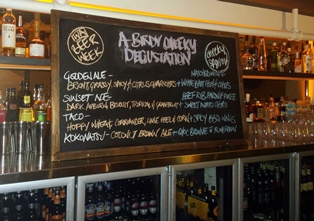 One of the venues involved in WA Beer Week last year.

Event registrations have opened for theWA Beer Week 2014, which will run from October 25 to November 2.

WA Beer Week features events from across the state, showcasing the finest craft beer from Western Australia and the globe. In 2013 more than 25 breweries from four states and several countries participated in the biggest and most successful WA Beer Week to date. Highlighted by events such as The Beermuda Triangle, Beer Skool Fight Club, Night of The Barrels and East vs West, the week reached thousands of beer drinkers across ten days.

Beer Week Event Director Reece Wheadon believes the evolution of the events from the past two years will keep rewarding brewers and venues in 2014.

“Last year we saw huge growth in non-craft venues getting involved rather than all breweries or all craft focused venues. The majority of people coming through the events were new to craft beer and we hope to see them and their friends again this year,” Wheadon said.

With the craft beer segment growing while overall beer consumption declines, events like WA Beer Week are the perfect fit to suit the shifting market.

“Consumers are getting curious, it’s no longer get a beer and stick to it, there’s experimentation and growing knowledge,” said Wheadon.

“Gateway beers likeJames Squire andLittle Creatures have opened the minds of a generation of consumers for the likes of Feral to take them to the next level.”