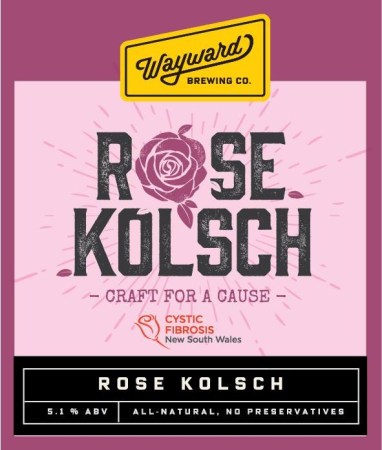 Wayward Brewing and Cystic Fibrosis NSW (CFNSW) are collaborating for their second annual Rose Kolsch beer, which will be tapped at an event at the brewery’s Cellar Bar on 27 April.

Two kilograms of rose petals and one kilogram of rose hips have gone into the brew, acting as a symbolic ingredient for the CFNSW 65 Roses annual fundraising month.

The brewers at Wayward add the rose petals at both the whirlpool and dry hopping stages, giving the brew a slightly pink colouring.

According to Wayward, the rose hips provide a real citrus hit while the rose petals add a lovely, subtle floral note, both of which complement the spicy/herbal notes of the German Noble Hops used in the Kolsch.

Wayward’s Creative Director Marissa Ciampi told Beer & Brewer that the ‘Craft for a Cause’ initiative is really the brainchild of Wayward founder Peter Philip.

“It started with him thinking that in a lot of other countries, craft breweries are cornerstones of the community and are very involved in charities and charity initiatives – he really wants to bring that to Australia.”

Ciampi described the collaboration with CFNSW as a “natural partnership”, explaining that they were chosen as the partner charity for similarly community-minded reasons: the headquarters are just up the road at Royal Prince Alfred hospital and the CEO is a regular at the Wayward Cellar Bar – her son even became one of the bar managers.

As well as raising money for CFNSW, Ciampi said the Craft for a Cause initiative is also about raising awareness of cystic fibrosis, one of the most common degenerative diseases in Australia.

“One baby with CF is born every four days, and there’s over a million carriers of the CF gene in Australia – it really is a major issue.”

Just like last year, the beer will be available at the Wayward Brewing Cellar Bar and across partner venues in Sydney, starting from 27 April and continuing for the entire month of May.

Wayward will again donate 100 per cent of profits from the Rose Kolsch to CFNSW, with partner venues (TBA) also donating $2 of every schooner sold.

Last year Wayward donated around $15,000 to the cause, and Ciampi said that this year, “we’re obviously going to try and raise as much as we possibly can”.

As for the future, Wayward plan to do two more Craft for a Cause initiatives this year, hopefully partnering with more local breweries and charities tied to the local community.

So raise a glass for a good cause – participating venues will be announced over the next couple of weeks (keep an eye on the Wayward Facebook page for more information).