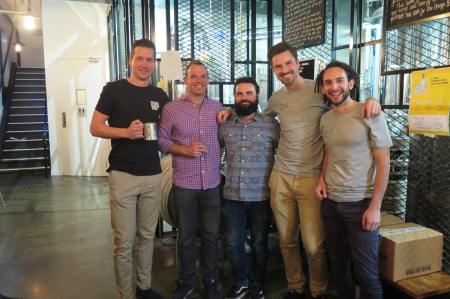 Avid homebrewer Ryan Molesworth is turning his passion into a career after winning a competition that will see his brew distributed across Melbourne.

The HopsAboard competition was a crowdfunded campaign that will brand and brew 1000 litres of Molesworth’s winning beer for commercial sale.

The winning beer, a Hefeweizen that he brewed with his best mate David Fisher, will be delivered directly to crowdfunded pre-orders and available on demand in a partnership with alcohol delivery service, Tipple.

Molesworth, a Land Surveyor, began brewing his own beer in 2010 after a university friend introduced him to the practice, but aside from entering a few local competitions and brewing a batch for a cousin’s wedding, this is the first time he’s shared his brews outside of his circle of friends.

Ryan said that winning the Hops Aboard competition has given him the excitement and incentive to consider a career change.

“Being a beer brewer has been a long term dream I’ve always had at the back of my mind, and winning this competition has definitely ignited a little spark that will hopefully make me do something with it.

“It would be incredible, there’s nothing concrete just yet but we’re trying to figure out how to make it work and capitalise on this win and keep the ball rolling. It’s good, this win helps me justify spending as much money as I do on this hobby – this is the jump off that we need so it’s really exciting.”

Molesworth’s winning brew is a German-style Hefeweizen that was selected by an all femael judging panel including Beer Dica Kirrily Waldhorn, Becky Centeno and Sarah Otton on 7 October.

He says the beer, which will be called Wheat Merchant, is a bit different to what a lot of people would expect and people are always surprised to hear that there is no banana in the brew.

“Like some of the more summer-y style Hefeweizens it’s got some really distinct banana notes which we were going for. There’s a bit of clove there too to help balance it out, but it’s nice and light, pale in colour and it’s just an easy drinking beer and a great drink for summertime.”

So why did Molesworth decide to go with a Hefeweizen?

“Honestly… we’ve brewed up quite a few pale ales and there’s some really tasty ones that we’ve done together. But I honestly thought that this Hefeweizen was going to be a point of difference, I thought there’d be a million pale ales in there and wanted to stand out.

“It was actually the first time we’d brewed that beer, so it wasn’t even like we’d refined it too much, like we probably have with some of our pales. But I just imagined the judges getting 40 pale ales and having to pick one out of the lot.”

Molesworth told Beer & Brewer that winning the Hops Aboard competition is surreal and he’s excited to see where it takes him.

“It’s awesome, it’s incredible. It was a great experience and it’s a bit surreal – and still is a little bit! It was just a great feeling.”