By Tam Allenby on May 2, 2018 in Beer & Breweries, Craft Beer, Industry, New Beers, News, Rest of the World, Where to drink 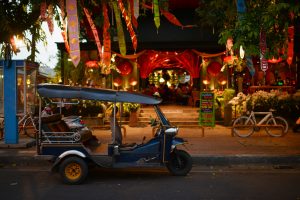 As a result of the partnership – and with the help of local Thai university students, who also helped create the brand – Tribe and BB&B have launched a nationally distributed Thai beer with a range specifically developed for the local market, which includes a Witbier and an IPA.

“Chao Siam means ‘Thai People’, and with so many foreign brands in our market place, we are so proud to work on a project that has been created for and with our people,” says Pongchalem of BB&B.

Interestingly, the unique Thai-Australian collaboration came about via a direct and deep personal link between Tribe’s co-founder and the South East Asian country.

“I grew up in Thailand and then went on to spread my time equally there and in Australia,” explains Stefan Szpitalak, head of international markets and co-founder of Tribe Breweries.

“I spent years exploring the vast culture, even becoming a monk as a rite of passage. My personal connection to Thailand is very meaningful to me and our company. Seeing this project come to fruition has been a dream of mine ever since we launched Tribe Breweries.”

With BB&B one of Thailand’s oldest and largest premium alcohol importers and distributors, Tribe has been able to tap into their market expertise and distribution channels for Chao Siam.

“Working with local artisans to create great brews that speak directly to their audience is what Tribe is all about,” add Szpitalak.

“Branching out of the Australian market with new brands and sharing our craft beer journey throughout South East Asia is an exciting milestone for us.”

Tribe has also announced the acquisition of the nationally distributed Wilde Gluten Free range – which was already being produced at Tribe’s Smeaton Grange facility – in the aim of growing the distribution of the brand both nationally and internationally.

“Tribe is a natural home Wilde, having been the only place to have ever made it,” says Anton Szpitalak, co-founder and CEO of Tribe. “We have experienced rapid growth and this acquisition reflects our current growth position in the craft beer market.”

The two-pronged announcement comes off the back of a flurry of movement from Tribe, including the restructure of Brewpack and Stockade under the Tribe Breweries umbrella, the construction of a new brewing facility in Goulburn, and the future opening of a Stockade Brew Co venue in Marrickville.