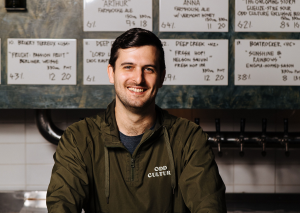 James Thorpe, owner of The Taphouse

It has been two years since James Thorpe took over The Taphouse in Darlinghurst, NSW, and since then he has transformed the venue into a place that now sits atop of Beer & Brewer’s 2019 Top 65 Beer Venues. We caught up with owner James Thorpe to talk more about this champion of independent breweries.

WHAT HAVE THE HIGHLIGHTS OF THE LAST TWO YEARS BEEN?

The encouraging thing is that we are doing ok, that we’ve been able to make this work. When we bought The Taphouse I said that it was an experiment because I didn’t know if a pub without pokies or a tap contract could work, but it can.

The highlights have been the incredible events that we’ve run, the amazing beers that we’ve been able to brew in collaboration with breweries and the relationships we’ve formed with those people and also the people in our market as well, guys that run bars in our area that we’re close with.

WHAT MAKES THE TAPHOUSE UNIQUE?

As a group, we have a really central belief in only supporting independently owned breweries, whether in Australia or otherwise, but we have a strong preference for local breweries on tap. We struggle being one of the only pubs in Sydney that only serves independently owned beer. That puts us at a significant disadvantage in terms of our cost and we don’t enjoy the massive rebates that other venues get from tap agreements.

We have a no pokies policy so both our venues don’t have them. They both used to, and they were taken out.

WHAT ARE YOUR THOUGHTS ON THE CRAFT BEER ON-PREMISE MARKET AT THE MOMENT?

We’re a long way from where I started in my career. The independent beer sector is on the rise, which means the volumes are up, which means economies of scale are up, which means that prices are coming down all the time. People on the other side of the coin call it the race to the bottom but it’s actually a really good thing for our part of the industry because it makes indies competitive with the big guys.

The end result is that we can have beers on tap for $6 a glass at the pub and we can sleep well at night knowing that we’re supporting local businesses. Craft beer used to be seen as an expensive exercise. And it still is in certain parts and there are reasons for that, especially in Odd Culture where we’re obsessed with oak barrels.

WHAT ARE YOUR PLANS FOR THE FUTURE?

“We are planning a major renovation of the main bar area in The Taphouse, just a bit of an update, it’s the last area of the pub that hasn’t been refreshed. That’s on the horizon.

WHAT ADVICE WOULD YOU GIVE TO SOMEONE HOPING TO OPEN A CRAFT BEER VENUE?

I would encourage any venue owner to consider tearing up their tap contract. The state of affairs that I’ve spoke about are only going to get better. More people are drinking indie beer and the market is very heavily saturated. You can pour better beer for a similar price and sleep well at night. It’s becoming possible, the dream is more reality every day.