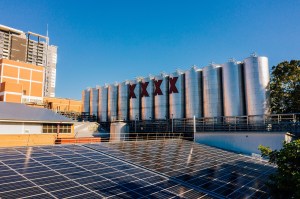 Lion has revealed it has completed the $2m project to install more than 2200 solar panels at the XXXX Castlemaine Perkins brewery in Milton.

The 690-kilowatt system has been installed on the roof at the brewery and is enough to generate the equivalent amount of electricity consumed by 130 large homes in Brisbane in a year.

“This will reduce the site’s annual carbon emissions by about 1260 tonnes, which is about seven per cent of CO2 emissions from electricity used at XXXX,” Lion’s Group Supply Chain Director Ian Roberts said.

“We are committed to reducing our environmental footprint and being a good neighbour to the many residents and businesses that call Milton home.

“And we will keep the big yellow wheel in place on Milton Road just as a reminder of how far we’ve come. It is change like this that has allowed us to preserve the brewery’s rich history and keep making Queensland’s favourite beer. This is something everyone at XXXX is very proud of.”

This latest investment in the brewery is on top of more than $5m already spent on brewery improvements over the past decade.

The solar panels will generate 1.2m kilowatt hours every year and form part of Lion’s commitment to reducing its emissions by 30 per cent by 2025.