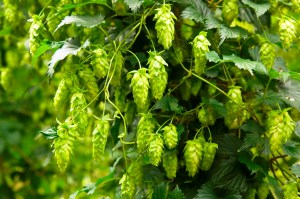 Hop farms tend to be quiet places – except for a few weeks in early March and April, when farms across the southern hemisphere are abuzz with the excitement of a fresh harvest, as Jeremy Sambrooks discovered in our Autumn issue.

Hops. As one of the four ingredients in almost every beer in the world – the others being water, malted barley and yeast – they’re the only one that’s truly unique to beer.

Hop cones are the female flowers of the hop plant, Humulus Lupulus; a climber that is usually trained to grow up strings in hop fields. They belong to the Cannabaceae family of flowering plants which also includes cannabis, though they have none of the notorious weed’s psychoactive properties. After being picked, hops are usually dried, processed and pressed into pellets before being used in the brewing process, although whole hop flowers can be used as well. Hops impart beer with a tangy bitterness and well as distinctive flavours and aromas.

While people have been brewing and drinking beer for millennia (evidence suggests at least seven-thousand years), hops are a relatively new addition, not gaining popularity until the 13th century. Prior to then, beer derived its bitterness from a mixture of herbs known as gruit. As well as providing their distinctive aromas and bitterness to balance the sweetness of malted grains, hops are used in beer making for their antibacterial properties, which help to prevent spoilage.

For most of the year, hop farms are quiet places, as the crop is carefully tended to and measurements are taken to determine the right time to begin the annual harvest. Then, for a period of a few weeks, there is a buzz of excitement as fresh hop cones are stripped from the bines, kilned, baled, pelletized and packed. Each new harvest’s crop will have a slight variation in flavour – a reflection of the seasons passed.

Hops were first introduced to Australia in 1822 by William Shoobridge, a Kentish farmer, whose son, Ebenezer, established the Bushy Park hop plantation in Tasmania, which today is owned and operated by Hop Products Australia (HPA). Today – between Bushy Park and Rostrevor Hop Gardens in Victoria – HPA handles around 90 per cent of the hops grown in Australia. Their hop harvest takes place annually in March, into early April. “Seasonality can have a profound impact on the outcomes of a hop crop,” says Tim Lord, Managing Director of HPA, “and that’s before any natural disasters such as hail or heatwaves. This season is looking great, so fingers crossed for a good result from here.

“The changing tastes of beer drinkers has affected our business – it has caused us to release new varieties and offer new choices in flavour to the brewers. Enigma is our newest commercialised variety and is becoming more widely available. Our next experimental variety, HPA-016, will be available to commercial brewers in very limited amounts this year too.”

Another local grower, Ellerslie Hop, has a history dating back to the 1930s. They currently grow five hop varieties: Australian Cluster, Super Pride, Pride of Ringwood, Melba and Astra – the last two being developed by and exclusive to Ellerslie. Ellerslie Hop also provide the brewing industry with several varieties of US and European hops, as well as hop oils and extracts, and brewing and distilling malt.