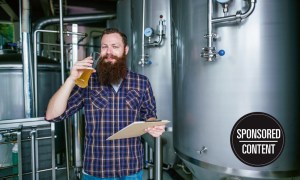 Centrifuges have been known in brewing circles for some time and the advantages that they bring to the fermentation and maturation beer processes of sedimentation and filtration processes are starting to be utilised by a growing number of craft breweries overseas and in Australia and New Zealand.

Now those advantages are being improved upon further, with new technologies from manufacturers making centrifuges a valid alternative to natural settling tile and various affordable filters.Sedimentation, clarification and filtration are essential processes in brewing where the beer is separated from unwanted solids – like residual yeast, hops and proteins – to leave a brewer with a clean beer.

Traditionally after fermentation the remaining suspended yeast and any hops are left to settle to the bottom of the conical fermenter, which can take considerable time. They are then separated from the beer using a racking arm above the sedimented yeast and hops in the bottom of the cone section to transfer the green beer to a maturation vessel for final conditioning. When the cone section of the fermenter is eventually cleared of these sedimented solids, a reasonable amount of valuable beer is lost, together with these solids.

After maturation of the beer at low temperatures over a period of time typically there is some residual yeast, hops, proteins and other compounds that form haze in the beer, which traditionally has been removed by Kieselguhr, candle, membrane sheet or cartridge filters which can be limited in their solids capacity, slow in filtration and expensive to maintain and clean.

However, Alfa Laval’s latest Brew separators are self-cleaning beer centrifuge clarifiers and polishers, which can cut considerable time from the filtration step after fermentation and maturation.

The centrifuge uses centrifugal force to do the physical separation using gentle acceleration in the bowl and the internal disc stack. Rotating at thousands of rpm also provides increased settling area to clarify and remove unwanted yeast, hops and protein solids from beer in a fraction of the time.

“Settling in fermentation and maturation tanks can take days whereas our centrifuges can complete the same task within hours thereby increasing tank turnaround times and increasing capacity for a brewery by up to 15-20%, as well as increase beer recovery by up to 6%.

“Compared to beer filters, centrifuges provide faster clarification and/or polishing without removing the wanted volatile aromas and flavours in your beer; are much less prone to clogging; will increase beer recovery from tank bottoms; and all this essentially without any oxygen pick up.”

Alternatively a centrifuge could be used upstream to extend the run length and capacity of a beer polishing filter.

“To give you an example, a leading Australian craft brewery installed the Alfa Laval Brew 250 to reduce filtration time and meet growing demand,” says Cirillo. “Previously with beer filters, the filtration process took about eight to nine hours at a time. With the Brew 250, the whole process only takes one or two hours while also increasing tank turnaround time which leads to greater brewing capacity. It also gives them higher yield and reduced beer losses.

“That increase in yield can be up to 6-10%, a huge return on investment, especially for brewers looking to increase production to meet growing demand. It is achieved by getting the solids away from the beer quickly, cleanly and continuously without losing valuable beer.”

Centrifuges are evolving all the time as well, as manufacturers seek to help brewers in their quest for consistently quality beer. At Alfa Laval, one of the innovations that is making a huge difference is the introduction of a bottom-fed, fully hermetic machine.

The Brew centrifuges come with a unique Alfa Laval axial hermetic top-fed design with a guaranteed oxygen pick up < 20 ppb, or the fully hermetic bottom-fed design with virtually zero oxygen pick up. This is critical for a craft brewer wanting to produce a high quality, consistent beer with increased shelf life, free of off flavours due to oxidation and haze caused by colloidal instability of oxygen reacting with proteins and polyphenols.

“The big enemy of breweries is oxygen”, says Cirillo. “Because that’s what degrades the beer. With our fully hermetic bottom-fed machine, we can guarantee virtually zero oxygen pickup. So for high quality craft brewers that a big, big plus.”