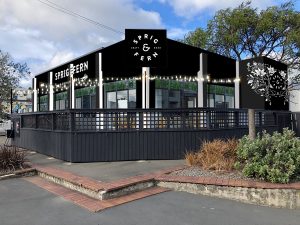 An artist’s impression of the upcoming venue

New Zealand brewery Sprig & Fern has announced the location and branding for its next tavern, which will open in Berhampore, a Wellington suburb.

“I have been looking at expanding with the Sprig & Fern brand for a while, but was waiting for the right location,” states Lee Fern. “This site is a great opportunity to take our brand to the Berhampore community and showcase all Sprig & Fern has to offer.”

The new venue will become the 12th bar under the Sprig & Fern brand umbrella and will be owned by Lee Fern, who also owns the Sprig & Fern Tavern in Hardy Street in Nelson CBD. It will focus on ‘community and conversation’ and will have no televisions, pool tables or pokies.

“We are very excited about the expansion of our venue footprint in the Wellington area,” says Lee Brown, Sprig & Fern Brewery general manager. “With all the community, family friendly, environmental elements and great conversation that you come to expect from a Sprig & Fern venue, there are now more options than ever for our Wellington supporters, just in time for Beervana.”

Do you love beer, bars and sales? Then we've got just the role for you.

A Big Beer Perfect for Staying In

Get our App! For brewers, by brewers

Fermentis has designed a new application to advise and help all brewers.

New details for the October 24 festival will be released soon. The Carwyn Collaborational is[...]
View Calendar
Add