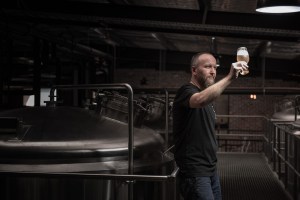 Balter Brewing Company has enjoyed a meteoric rise since Scott Hargrave joined it two and a half years ago. It sits at the top the list of favourite breweries in Beer Cartel’s Craft Beer Survey, its beers have won medals and competitions on an incredibly consistent basis, and the smiling cans are fast becoming a ubiquitous addition to bars and bottleshops across the country.

But Hargrave himself didn’t even consider brewing as a career choice until 2006. Before then, he had been a passionate consumer of German and Belgian beers, seeking out new and interesting beers to try as he worked as a concreter in Canberra.

“I was with one of my relatives and he just said ‘if you’re passionate about beer, then do something with beer’,” Hargrave recalls. “So I went back and got on an education course at The Wig and Pen. Lockie [Lachlan McOmish, owner of The Wig and Pen] replicated a mini mash and when I smelled it, it went straight to my brain. It was so familiar despite the fact I’d never had anything to do with brewing. It
altered my brain chemistry.”

He joined Canberra Brewers on McOmish’s assurance that you didn’t need a science degree to become a brewer: “He said ‘as long as you’re passionate and you’re good, go for it’.”

Two years after his first homebrew, Hargrave became head brewer at Sunshine Coast Brewery, winning medals for every beer he entered. Then he became the first full time employee at Stone & Wood, staying there for four years, before heading to be head brewer at Byron Bay Brewery for 18 months.

“Then the founders of Balter came calling. We had a six week courtship and I went there.”

Since then, it’s been a roller coaster ride of medals and trophies for the brewery, alongside significant growth in terms of output, but also personnel and skill.

“The gongs are a highlight and show we’re heading in the right direction, but what we consider great is being considered great by peer judging and the public as well,” says Hargrave. “To get both ends of the spectrums is great. For me, the four or five guys who run Balter – to see those guys come from outside
beer and become beer industry pros and doing it well, that’s been cool to watch. Now there are 50 families who have food on their tables because they make Balter beer. That’s awesome.”

So what are his favourite beers to drink and brew?

“My favourite style to drink changes with the direction of the wind! There’s nothing like a supremely well-made classic pilsner. I love it when you have an IPA or a IIPA that just sings because of the hop characters. There’s nothing as comforting as a milk or oatmeal stout when the weather’s not great.

“My favourite style to brew is the next one: when I’m working on the pilot, working on concepts in my mind and I have this idea of how it should look, smell and taste, how it should feel. And they’re just concepts in your head, but when you can bring that to life into something staring at you in the glass, and
someone else can get enjoyment from that… that’s pretty gratifying. The most exciting beers for me are the ones I’m working on – they’re mysteries. I want to unlock the true potential in the beer – how do I make it pop and be the best expression it can be? I like to tinker like that.

“Sometimes you take a swing and it ends up on the green, other times it takes endless refinement to knock the bumps off, and they’re sometimes more gratifying – when you crack something that’s been eluding you.

“I’ve made good beers, I’d like to think I haven’t made my great ones yet. I’m still searching.”

And what’s next for Balter?

“We’re looking at some stuff – a limited release program. It’s about expressing the ingredients at their best and techniques at their best. I have a pilot system that I want to expand. There’s always a way to push forward. The potential is just vast, there are horizons and horizons. You could go down a rabbithole just with IPAs.

“As we get into the new year and hopefully sort out our capacity issue, we can look wider at smaller more limited releases without disturbing the day to day beer that we have to make so we don’t let people down.

“I don’t want to do anything half arsed, it needs to be done properly. I’m not into doing token average beers just because everyone is doing it. You’ve got to do something properly or not at all. We do want to get a small barrel program going and do some sour beers down the track, but we don’t want to compromise 50 people’s incomes by not being careful.

“There are always boundaries to push, new ways of doing things. I intend to spend a lot of next year chipping away.”