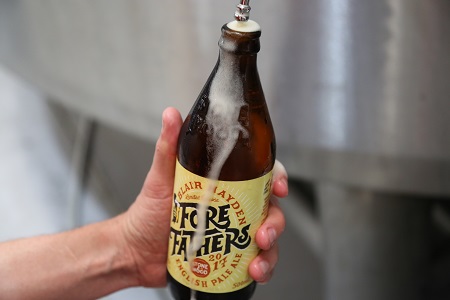 Stone & Wood has this week released its 2017 Forefathers beer, an English Pale Ale brewed by one of the true pioneers of the industry, the Lord Nelson’s Blair Hayden.

The Forefathers collection pays homage to the pioneers who have paved the way towards today’s burgeoning beer industry. The inaugural release in 2015 was an English Brown Ale brewed in collaboration with Phil Sexton, and last year it was a Doppelbock Lager brewed with Willie Smith.

This year’s Forefather, Blair Hayden, is a publican and patriarch of The Lord Nelson, one of the oldest pubs in Sydney. Refusing to bow to tightly held tap contract restrictions, he built a brewpub so that he could pour his own beers, all in the style of the traditional English style ale.

Thirty-one years on, Hayden is still contributing to the independent beer revolution.

Jasmin Daly, Creative and Community Manager for Stone & Wood explained to Beer & Brewer why Hayden was the perfect choice for the third annual Forefathers beer.

“Blair is an industry legend who hasn’t only contributed to the independent beer revolution over the past 30 years, but is also continuing to fly the flag,” she said.

“We have so much respect for Blair – his passion for the industry, for good beer and customer service… and also his sense of humour and colourful language!”

Using the finest English Maris Otter malt, Hayden brewed a 5.6% ABV English Pale Ale. With hints of citrus zest from the addition of bergamot tea, the spicy and floral hop aroma is balanced with a medium bitterness.

Blair Hayden’s Forefather English Pale Ale is a limited release that is available now. It will be officially launched tonight at The Lord Nelson at The Rocks in Sydney.