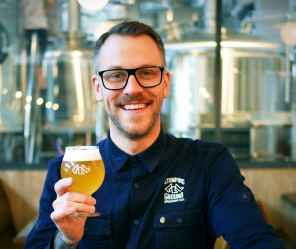 The Cicerone Certification Program has four levels and Marinich has achieved Level 3 after two trips to the USA. The certification has a pass rate of 20%.

“But they allow you to pass or fail independently, so I kept my registered pass on the tasting,” says Marinich. “I then retook the written exam, which involved going back to the States. Once I’d wallowed in self pity for a couple of months, I got back on the horse and put a yearlong study plan together. I knew what depth of knowledge was required. That was an advantage second time around. I got 88% in the written, which brought my overall score to 84%, which is a clean pass.”

Marinich learned from his first exam and came back with a better understanding of what was required to pass.

“The first time, I thought I covered a lot of areas, but there were things I brushed over that I had to write essays about. The second time around, I put a plan for what I needed to study each week and spent time on it. That was how I had to think about it, ticking things off the list, chewing through information each week, understanding that you can’t brush over anything.

“I knew it would be tough, but we all love beer, so it was expanding the knowledge of what I’m already passionate about. You need to draw on your experiences as a bartender or a brewer or a chef, because you get quite a lot of room in your eight essays to draw on your life experiences. Use what you’ve done, practise beer and food pairing at home, surround yourself with people who are positive about what you’re trying to do. There were styles we needed to know about that haven’t been brewed commercially for 50 years.”

The final stage of the Cicerone Program involves a two day exam and is another step up.

“Beer education has always been such a huge part of what we do,” adds Justin Joiner, operations director at Stomping Ground. “The example Matt has set in this area as a leader, not only in our businesses, but in the Australian beer industry, is a credit to him and we are enormously proud of him.”