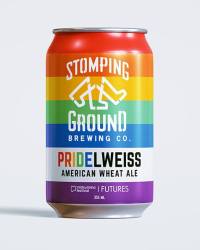 Stomping Ground Brewing Co. is getting behind equality by re-releasing its limited edition brew PRIDElweiss in January 2018.

Steve Jeffares, the Co-founder of Stomping Ground, told Beer & Brewer that they are getting behind the ‘Yes’ campaign because equality matters.

“We don’t generally get involved with politics, but wanted to show our support for the ‘Yes’ campaign publicly as we believe equality for all in our community matters.”

At that time, PRIDElweiss was a Belgian style wheat beer brewed with peaches, and 50 cents from every pot sold during the festival was donated to Midsumma Futures, a mentoring program for emerging artists in the LGBTQIA+ community – in total $8000 was raised.

The second batch will be a more approachable American-style wheat ale and for the first time it will be canned.

“While we support a whole range of cultural and charity initiatives, we plan to have a few that we are able to focus more time, energy and resources​ to each year. One of them is our exciting partnership with Movember where both men and women can help us raise $75,000 for men’s health issues by simply drinking Stomping Ground ‘Gipps St’ Pale Ale in November,” said Jeffares.

“Our PRIDElweiss campaign with Midsumma will be another one. Midsumma is in the process of extending their Futures program into Sydney so from the middle of January for at least a month, PRIDElweiss will be available on tap at supporting venues in inner Melbourne and Sydney.

“We will also be canning the beer for the first time and hope that they will be sold in supporting venues, independent bottle shops and possibly even the major chains too.”

Today is the last day to update your enrolment details to be counted in the Marriage Equality postal plebiscite. You can head to http://www.aec.gov.au/enrol/ to make sure you are heard.