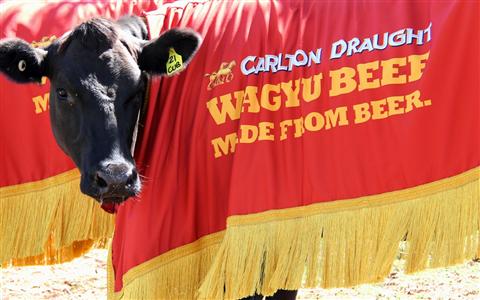 Available for tasting on 15th April in Croydon, Melbourne, the specially created Carlton Draught Wagyu Beef is made from beer, coming from cattle raised on a diet of Carlton Draught malted barley and hops. Carlton Draught partnered with free range farm, Jac Wagyu, to rear 20 head of cattle on the quality ingredients used to createpopular draught beer, Carlton Draught.

The result of this program is a modern twist on a classic Australian pub tradition of beer and meat trays.

“The only way we could make this better was to combine Australia’s favourite draught beer with Australia’s finest meat trays.”

The meat has been produced to celebrate the Carlton Draught Massive Meat Wheel promotion which gives Aussies the chance to go for a spin on the world’s tallest cantilevered observation wheel, the EDF Energy London Eye, competing to win $100,000 and a meat tray.

The Carlton Draught Wagyu Beef will be available for sampling at a series of pub tasting events across Australia including:

Also a limited amount of the Carlton Draught Wagyu Beef will be available for Australians to purchase directly from Jac Wagyu or one of their preferred suppliers via the company’s website www.jacwagyu.com.au

For more details on these tasting events and other events in different states watch for updates on the Carlton Draught Facebook page at www.facebook.com/CarltonDraught