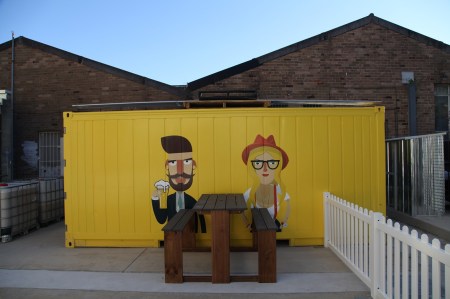 While Sauce cans have been on the market since November last year, it’s only now that founder Mike Clarke can finally say he’s got a brewery and brewpub of his own.

“We started planning for it almost two years ago, and then spent a long time looking for a venue – it probably took us nine months to find this place, so in the meantime we just started gypsy brewing to get our name out there and get some brand awareness,” Clarke told Beer & Brewer.

The three core beers previously in the Sauce range – Hop Sauce (Pale Ale), Extra Hop Sauce (IPA) and Mega Hop Sauce (DIPA) – have set the precedent for the brewery to deliver bold, hop-forward creations, but with 12 rotating taps at his disposal, Clarke aims to get more experimental.

“We’ll have a core range of maybe five-ish beers and then just do lots of different things to mix it up – we want to keep it interesting and keep people coming back to try new stuff. I’ve got a list of things I want to do, but you can’t do them all at once.”

On tap on opening day were the Hop Sauce varieties and the previously-released Saucy Red and Saucy Saison seasonals, as well as a single hop XPA brewed with Eureka, a hoppy Hefeweizen, a New England IPA (“because everyone has to do a NEIPA apparently these days”), a session IPA, an American Porter and cheekily named the Saucy Molé, a choc-chipotle spicy Porter.

The brewpub has a capacity of 100, and uniquely for the inner west breweries, there’s even a beer garden out the back (which, at the time of writing, is still being landscaped).

Eventually, Sauce will even grow its very own hops in the garden: “We’ve got a trellis going up, and we’ll be growing Columbus – there’s only about three varieties that grow in Sydney’s climate, but we’ll probably have enough Columbus for one batch of wet hop beer,” Clarke says.

Food trucks will roll in on weekends, and Clarke also mentions that patrons are more than welcome to order in pizza or anything else they’d like to munch on while enjoying the Sauce beers.

Conveniently located on the Inner West Ale Trail – opposite Bourke St Bakery on a side street between Batch and Grifter – Sauce should have no trouble with attracting customers as craft beer enthusiasts are increasingly drawn to the hotbed of Sydney brewing.

The brewery’s capacity currently sits at 20 hectolitres, capable of producing around half a million litres a year, but Clarke also has his eye set on expansion.