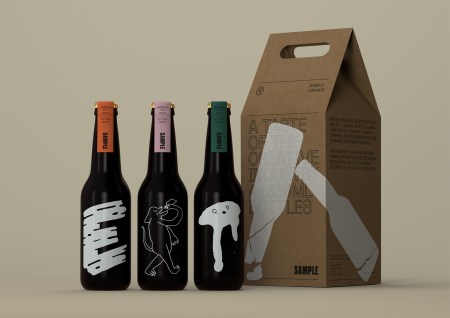 Sample Brew has collaborated with a Sydney design studio to create a limited-edition beer, developed using data that demonstrates the lack of diversity in the creative industry.

Titled SAMPLE for RARE, the new beer aims to kick-start the much needed diversity discussion across the industry, and will be available for one night only.

SAMPLE for RARE uses data regarding the gender split in senior positions, LGBTQ representation, the gender pay gap, the number of Non-European individuals, and those with disabilities or special needs – to create a brew that is representative of the industry it was borne out of.

Key ingredients are formulated to these statistics; for example, pale barley and pale wheat make up 82.9% and 17.1% respectively to represent the male to female split of CEOs within the industry.

The ABV is set at 6% for the number of gay, lesbian and bisexuals in the industry, while the IBU sits at 21.9 (%), signifying the current pay gap between males and females.

“The pay gap is supposed to leave a bitter taste in your mouth,” says Arron Ollington, Head of Brand Experience & Activation at SAMPLE Brew who project managed the multi-collaboration.

SAMPLE Brew’s Brand Director Ennis Cehic says, “We’re a brand that believes beer is the ideal supplement to conversations and creative thinking, and SAMPLE for RARE is the perfect example of our philosophy. It’s the ideal trigger for this important discussion.”

A first of its kind in Australia, the limited-edition beer is a multi-collaborative project between SAMPLE Brew, design studio MAUD, Co-Founder of RARE Tara Mckenty and top international and local artists Vexta, Gemma O’Brien, Minky Stapleton and Andrew J Steel who created limited, hand-crafted designs for the bottles.

Only 570 bottles have been produced and will be available to try at the Rare Masterclass wrap party on Friday November 24 from 5:30pm. Packs of the beer will be also be up for sale at the art auction alongside original artworks by the Rare artists in residence.

More information about the event can be found here.