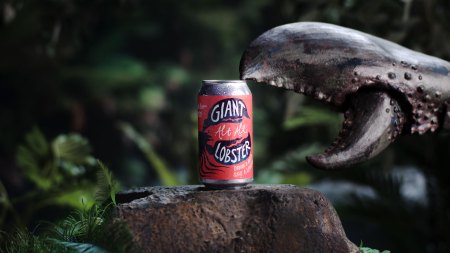 The Wilderness Society has teamed up with Moo Brew to create Giant Lobster Ale – a strictly limited but incredibly sessionable alt ale.

It was inspired by reports from back in the day, when The Tasmanian Giant Freshwater Lobster (the world’s largest freshwater invertebrate) helped bushmen open beers with its powerful pincers.

After decades of poaching, and with its northwest Tasmanian mountain stream habitat under threat from mining pollution and habitat loss, the Giant Freshwater Lobster faces extinction.

So local craft brewery Moo Brew (the brewing arm of MONA), has come to the party, providing their time, expertise and ingredients to make this beer a reality.

It has been funded by a successful crowdfunding campaign backed by members and supporters of The Wilderness Society.

All profits from the beer sales will help keep the pressure on the Tasmanian Government until this gentle giant’s home is protected by law.

Giant Lobster Ale is available exclusively through Beer Cartel and is an old-style cool fermented ‘Alt Ale’. Well-balanced, easy drinking at 4.5 per cent ABV. A touch of bitterness, toasty aroma. Clear copper-coloured, like the tannin-stained waters it calls home.

It is available as of 22 November until stocks run out and is raising money to protect the Giant Freshwater Lobster’s habitat.