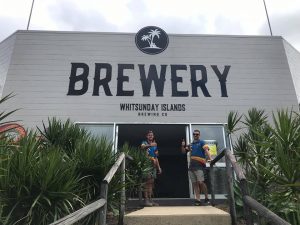 Queensland’s Central Coast now has a new brewery with the opening of Whitsunday Islands Brewing Co.

Founded by homebrewers Dan and Jacqueline McLeod, the brewery is located in Cannonvale near to Airlie Beach. The couple has also owned Denmans Beer Café in the Port of Airlie for around three years, a craft beer venue that offers 400 different products.

“We purchased Denman with the intent of opening a brewery there, so it’s been that long in the making but we’re finally getting there,” says Canadian Jacqueline McLeod. “The brewery is in an industrial area – it’s a good spot.

“We moved to Airlie and had plans of opening a brewery here. It was where we’d lways come on holiday. When we moved and Denmans came up for sale, we thought that was a good way in. We were planning on having the brewery originally at the venue, but logistically it didn’t work. But it’s worked out better for the business.

The 1,000 litre brewhouse was supplied by Precision Brewing. The McLeods have bough a bottling line from the UK, but for the moment all their beers will be in kegs, with the first release on show at Denmans Beer Café. The café itself is undergoing a renovation as well to add more taps to what was a principally packaged offer.

Whitsunday Islands Brewing Co has two lagers , a pale ale, an IPA and a dark ale made with coffee from a coffee maker next door to the brewery.

“We’re doing a pumpkin beer because I’m Canadian and that’s one of the first things we grew as homebrewers when we started brewing together,” says Jacqueline. “So it’s our personal favourite. But then we’ll do seasonal releases as well.

“We’ve had a lot of interest from local businesses,” adds Jacqueline. “We have a beer in the area now and that’s great. We’re very touristy here and people, when they come in, they’re constantly asking for local. And there’s nothing really that we carry that’s not from Brisbane which is a 10 hour drive away.

“The area is ready for [a local brewer]. I think it’s good timing. We only plan to distribute in the local area.

“We were always thinking we were going to start a brewery. But we never thought we’d have the place we have now. It’s really great that we had the chance to be within the industry first. We’ve learned a lot being part of the industry. We’ve able to talk to other brewers. It’s been so great that we did it that way. We never anticipated we never thought we’d run a restaurant but we’ve learned so much. It’s going to be more successful because of it.