When one thinks of agriculture in Queensland, the delicate and demanding hop doesn’t’ spring readily to mind. And yet, two small scale growers have embarked on a mission to grow hops here.

Rick Humphries, founder of Possum Lane Hops in the Granite Belt, started growing four years ago after “a few excellent Italian pilsners at our local craft brewery, Brass Monkey” in Severnlea. The brewery had a few bines growing out back, so he decided to give it a go himself on some spare land on his farm.

“We planted around 150 bines in the first year – a number of varieties,” explains Humphries. “They went ok, but there are no reference points up here for growing hops. We’re way outside the accepted zone, we were playing it by ear.”

Since then, Possum Lane Hops has been joined by Brisbane Hill Top Hops, founded by Steve Mitchell and Andrew Carson. Hill Top had its first season last year, where they planted 30 bines –American Cascade, Tasmanian Cascade, Chinook, Victoria Red Earth, Columbus and Centennial. Since then, they have expanded to around 200 bines, with a second expansion planned to double the footprint for next season.

“They (Archer) had the novel idea of sourcing all their ingredients from Queensland,” says Carson. “As far as we know they’re the first brewery in Queensland that have sourced their ingredients. They got water from a local desalination plant, hops from us, they got grains from a farmer in Queensland and got it malted it in Pinkenba, the malting facility. And they had a lab in Toowoomba isolate the culture of yeast they used for the brew.”

Both hop growers have had to deal with traditional challenges such as mites, which they are attempting to fight using predatory mites like Presimilus instead of chemical approaches. However, there are also further trials when it comes to growing hops in the sub tropics such as water, temperature and day length.

“We’ve just finished year four and droughts have definitely been one of those,” says Humphries. “We drip irrigate but there’s no substitute for the real thing and they’re pretty hungry on the water. We also got very unseasonal hot dry winds before December and that really desiccated the leaves and knocked them around as they were just coming into their own and starting to bud.”

“In an ideal climate you have a much longer day than Queensland,” adds Carson. “Washington state is the hop growing capital of the world and they have 17 hours of daylight a day. The plants seemed genetically predisposed to want that day length. Up here we get about 13.5 hours a day. 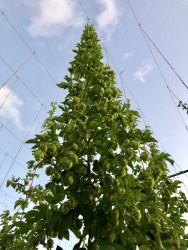 “The plants don’t grow as big and also the maturation of the cones and harvest can be more staggered in a shorter day length climate so that the main two things at the moment. The plants don’t get as big as down south. They don’t produce as many cones and it’s slightly staggered maturing.”

Humphries has one advantage over the Hill Top boys. His farm in the Granite Belt is 1,000 metres above sea level and gets winter frosts, which put the hops into a dormant state where they can grow better.

Humphries and Carson are planning a “themed holiday” to America where they will visit the hop farms of Washington, but also visit growers in Florida – which has a similar climate – to see what lessons they can learn from people who have been growing hops for the past four years.

“And one thing they’re looking at doing is extending the day length by using lighting to match a more ideal climate day length and shown some positive initial results with that and they also say turning the lighting off for a length of time can trigger maturation for consistency,” says Carson. “If you can use lighting to increase productivity and then make harvest dates fairly uniform that could be a win.”

So what advice do Humphries and Carson have for people looking to grow hops on a small scale, either in more traditional hop growing areas or beyond?

There are lots of people on there sharing about how they’re growing,” says Carson. “There’s a real community out there sharing knowledge. It’s nice. You ask questions you get answers and you share your wins and your losses.”

“It’s essential to get a read from people who have been doing it for a lot longer than you,” advises Humphries. “Horticulture in general, how the place works in terms of soil and climate to get your base line about what works and what doesn’t up here. All the problems, we can overcome them with tenacity, but you need a few quid behind you. One of the most important things is to link with other people who are giving it a crack in Australia or around the world.”