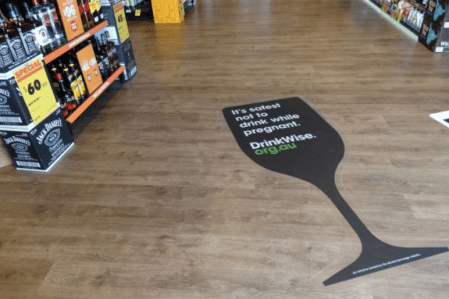 Australian and New Zealand ministers have agreed on a deal which will see every alcohol product in both countries carry pregnancy warning labels on them.

Food Standards Australia New Zealand (FSANZ) will now develop the labelling standard, which will include a pictogram and warning statement and make it available to the industry as soon as possible. Across the beer, wine and spirits sectors the initiative has been broadly supported, and the majority of products do carry the voluntary labels that have been available through DrinkWise since 2011.

A spokesperson for DrinkWise told TheShout: “DrinkWise has promoted the National Health and Medical Research Council’s alcohol guideline that ‘It’s safest not to drink while pregnant’ for many years via alcohol product labels, retail point-of-sale and within medical clinics.

“DrinkWise advocacy for the inclusion of the pregnancy messaging on alcohol labels has seen the majority of alcohol products sold feature the logo or message and over 250 additional downloads of the logo by industry participants since the start of this year. DrinkWise supports measures that increase awareness of the message that it’s safest not to drink while pregnant, planning a pregnancy or breastfeeding and will continue to use broad and targeted education initiatives to increase awareness of that important health advice.”

Fergus Taylor, the Executive Director of Alcohol Beverages Australia, added that he hoped FSANZ would recognise the work done by DrinkWise and the industry in creating a recognised standard for the labels.

“The current DrinkWise pregnancy label has been effective in raising high levels of awareness among pregnant women and it’s important it continues as the industry standard,” Taylor told TheShout.

“This will also ensure businesses that have complied and displayed the correct labels will not have to incur the additional cost of re-labelling their products for a second time.”

Brett Heffernan, the CEO of the Brewers Association of Australia, said that while it was disappointing that mandating pregnancy labelling for all packaged alcohol products is necessary the decision is a “no-brainer.”

“Our members – Carlton & United Breweries, Lion Beer Australia and Coopers Brewery – have been 100 per cent compliant with the voluntarily labelling regime since 2014, applying the warning pictogram across every product they produce,” Heffernan said.

“We are perplexed as to why others in the industry failed to heed the writing on the wall since 2012. The three major brewers got the job done, across hundreds of product labels, in just two years.

“After six years of voluntary pregnancy labelling and two federal government surveys to measure uptake, the best the alcohol industry could muster was 75 per cent compliance. Clearly, that’s nowhere near good enough.”

He added that the association will also work with governments and FSANZ to ensure the existing DrinkWise warning labels “which are demonstrably well-recognised and understood”, are adopted as the mandatory label.

“By mandating the existing warning label graphics, governments ensure that those who have failed to comply to date are dragged into the fold, while recognising that those who have done the right thing should not be penalised by having to change all of their labels a second time. Perversely, a new regime that varies from the existing labelling would reward recalcitrance.”

Spirits & Cocktails Australia CEO, Alec Wagstaff, also called on governments to look at the labelling already in place as the standard for its mandated labels.

Wagstaff told TheShout: ““All Spirits & Cocktails Australia members have implemented voluntary pregnancy labelling. Now that Governments have decided to take the matter out of the hands of industry and decided to regulate it is their responsibility to create an effective low cost solution.

“Spirits & Cocktails Australia suggests that mandating the existing labelling approach will be the most effective solution that will avoid unnecessary costs and ensure those currently not labelling can move to do so as soon as possible.”

He added: “We will also be looking to the state governments to effectively enforce any new regulation. In the meantime Spirits & Cocktails Australia members will continue to include pregnancy warnings on their labels.”

Stu Gregor, Co-Founder of Four Pillars and President of the Australian Distillers Association (ADA) told TheShout that the association has recommended to all its members that they adopt the labelling. He added that Four Pillars has it on all its packaging and 100 per cent supports the labels and that the ADA already planned to recommended adopting the labels to all its members at the annual conference in November.

In announcing the decision the Australia and New Zealand Ministerial Forum on Food Regulation said that it recognised the efforts of a large segment of the [alcohol] sector in voluntarily adopting pregnancy labelling. In recognition of these efforts, the Forum called for comprehensive consultation and appropriate transition timelines and stock-in-trade exemptions on new arrangements.

In a statement the Forum said “that, based on the evidence, a mandatory labelling standard for pregnancy warning labels on packaged alcoholic beverages should be developed and should include a pictogram and relevant warning statement”.

And while no time has been set, the Forum requested FSANZ develop the labelling standard “as a priority” and “that the work be completed expeditiously”.