The Bluery Brewing Company will be the first craft brewery in Dubbo, bringing together the combined business experience of the four founders and their desire to introduce craft beer to their fast growing city.

One of the four Brendon O’Sullivan, owner of online business and digital marketing agency Big Blue Digital, told Beer & Brewer that the idea for the brewery has long been a pipe dream.

“Recently we had a joint 50th birthday trip to South Africa, and we were talking about a time in our lives where we could now afford to do the things that we really wanted to do, and while we were there we all said, ‘you know, we’ve been talking about it for years – why not get serious about this craft brewery?’”

Working alongside O’Sullivan in bringing the Bluery dream to life are Paul and Melissa Knaggs – co-developers of Blueridge Business Park (the site for the brewery), and co-owners of construction company Blueridge Projects – and David Rich, a chartered accountant and owner of one of Dubbo’s oldest accounting firms.

“We all love our beer, thankfully we’ve found fantastic friends at BentSpoke – we’ve probably been invading their space down there a little bit too much this year but it’s been totally fantastic, they’ve put us in contact with so many smart people in the industry that have been in the business for decades,” said O’Sullivan.

While the neighbouring towns of Mudgee and Orange are already home to a number of craft breweries, the size of the Bluery operation will be much larger in scale; O’Sullivan compares the plans to Stomping Ground or Foghorn, and anticipates that “it’s going to be a bit of a tourist destination.”

“Our venue will be a one-of-a-kind venue for Dubbo and the region, welcoming new craft beer tourists into our city and will create as many as 40 new jobs,” added Melissa Knaggs.

One unique aspect of the Bluery team’s plan is that they’re literally building a brewery from the ground up – rather than retrofitting an existing space – giving them a large amount of freedom.

“We’re actually spoilt because we can construct a building that will meet our exact needs. So when we’re talking to the suppliers of our kits for example, they’re helping us with the best location, and we can actually start from scratch.

“Even things like drainage are not going to be a problem because we’ll purpose build the floor to start off with,” explained O’Sullivan.

And although the team haven’t started interviewing potential master brewers just yet, O’Sullivan is confident that his new friends in the craft beer industry will be able to help out in nominating a candidate. 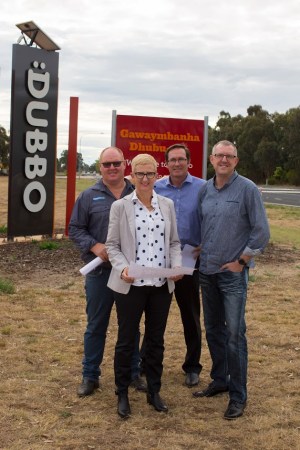 “That relaxation around sharing business secrets or whatever just blows my mind, and that’s another reason I’ve fallen in love with this industry. It’s one-for-all and all-for-one because we’re all trying to crack on to big beer, so the larger market we can get the better. “

While it’s early days, it’s clear the Bluery team are leaving nothing to chance; this thought out approach also applies to their future branding.

“We easily could have ridden on the coattails of Dubbo Zoo, but we’re actually not going to. Something that Richard Watkins shared with me: we’re making it about the community, so when  travelers and tourists come to town, the names of the beers and the theme will be of Dubbo and the area.

“A couple of quick examples: The Macquarie River flows through Dubbo, and there’s a bend in the river that’s got a deep swimming hole called Devil’s Elbow – what a fantastic name for a beer!

“We’ll offer as many as 12 bespoke beers on tap and freedom for our master brewer to develop seasonal brews supported by kegging, where initially we will produce around 3000 litres a week, and envisage this to increase dramatically in line with demand,” O’Sullivan said.

The Bluery will open in time for Oktoberfest 2018; all enquires can be made to cheers@bluery.com.au