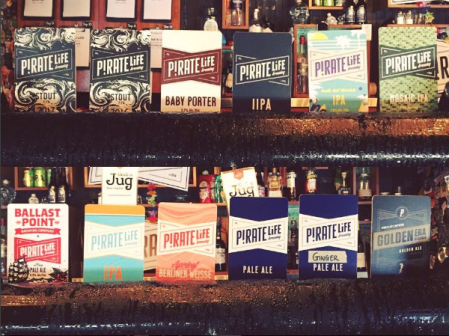 The Pirate Life team – headed by Michael Cameron, his son Jack and Jared ‘Red’ Proudfoot – have enjoyed vast success since signing the lease on their Hindmarsh brewery in November 2014.

“We started with three of us, and we’ve now got 41 people on the staff,” Cameron said. “We run our own distribution company around Australia and in the UK, and we’re currently exporting to New Zealand, Singapore, Hong Kong, with another four countries to come on board by the end of the year.”

With this success has come the need to expand production, and while eight new fermenters will be delivered to the Hindmarsh brewery in the next two weeks, the Pirate Life crew will soon outgrow their original facility and will need to add to their fleet.

“We’re in the process of building a new brewery in Port Adelaide which we’ll have up and running this time next year,” Cameron said.

This new facility will also host an onsite hospitality venue – something which is lacking at Pirate Life’s current home due to a lack of space.

“With the new brewery in Port Adelaide we’re probably looking at a 200-250 seat venue. That’s more about developing another offering Port Adelaide – the government here are doing a lot of work to try and develop Port Adelaide and if we can get the brewery up and running as a facility, it just adds to the tourism process that the government’s trying to work on here.

“We’re getting daily questions of ‘do you have a bar?’ and I think it’s just part of our business’ development. We always wanted to be a production brewery but I think as we’ve grown and developed, we’ll have a hospitality facility operating as part of the new brewery.”

Cameron credits Pirate Life’s success to a range of factors: quality (10 per cent, and in excess of $100,000 was spent on lab equipment when fitting out the brewery), the brand name (“the word ‘pirate’ seems to resonate with people emotionally,” Cameron said), and in the early days, getting out into the market and doing more than 270 beer tastings around the country.

“Moving to Adelaide has proven to be an absolute rock-star decision,” Cameron added. “Not only from from a distribution point of view, but it is a city that thrives on quality – its wine industry, food industry, its location and its beauty.”

From where Pirate Life are sitting – also winning Champion IPA for their Mosaic IPA at the Craft Beer Awards later that night – it’d be hard to argue with his assessment.