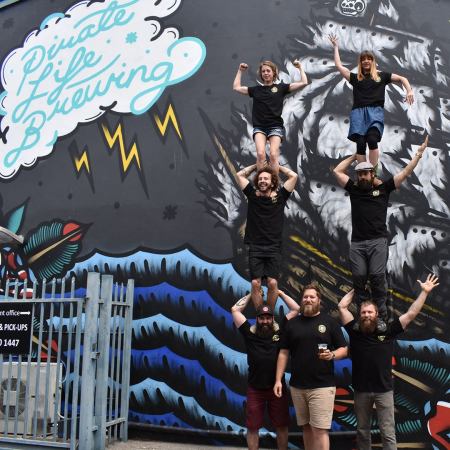 Pirate Life has again broken new ground with a beer collaboration – following the release of the Transpacific Pale Ale collab with Ballast Point last year – this time with an acclaimed Canadian circus troupe.

Regulars at the Adelaide Fringe, Cirque Alfonse and Pirate Life struck up a friendship a couple of years ago; a branded Pirate Life keg even found its way into the troupe’s 2017 show BARBU, taking centre stage at the Fringe and the Sydney Opera House as part of a keg juggling routine.

In 2018, the unusual partnership has been taken to the next level with the release of a limited edition, small batch brew: Alfonse Ale.

“It was a lot of fun and we love the attitude and energy Cirque Alfonse bring to the Adelaide Fringe so we thought this year we’d welcome them back to Adelaide with a special brew celebrating their new show – Tabarnak”, said Pirate Life Brewing co-founder, Michael Cameron.

“We’re calling it Alfonse Ale and Cirque Alfonse contributed by providing the flavours and style brief to our brewers.

“They’ve definitely brought a bit of Quebec to the beer but we’ve also made sure it’s the tasty thirst quencher you need for the hot summer nights of the Adelaide Fringe.

“It’s a small run beer only be available on tap at selected bars during the Adelaide Fringe and the Tabarnak season so Pirate Life beer lovers should get in quick before it’s all gone.”

In other news for Pirate Life, the popular brewery will soon be celebrating its third birthday – marking the occasion with the release of three new beers (which is quickly becoming a tradition).

Debuting at Pirate Life’s Third Birthday Sunday Session at ‘home’ pub The Gilbert Street Hotel will be a Strawberry Milkshake IPA, Black IPA, and Unfazed by the Haze IPA.