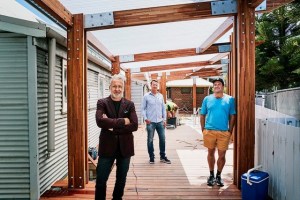 During the last 12 months, Triple-1-Three’s Otherside Brewery has doubled its brewing production capacity to support growth and has seen sales increase by more than 300 per cent. The group also launches its Otherside Brewhouse in Myaree in June 2018.

In 2019, it will launch Freo.Social, an entertainment venue that will include a microbrewery, a 550-person capacity entertainment hall,co-working spaces and artist workshops, food trucks and catering, and beer gardens.

Taylor was previous chairman and group managing director of WA-founded advertising agency 303MullenLowe and was instrumental in expanding the business into the eastern states.

“When I left 303MullenLowe, my plan was to find my next adventure,” says Taylor. “One where I could apply my skills to best effect. A place that gets the value of culture, is doing something really interesting and has a big and meaningful ambition. No question Triple-1-Three is all that and more. Its directors, David and James have started something really special which is clearly connecting with the community.

“There is so much scope for Triple-1-Three, and I am amped by the idea of building on all that has created thus far and helping to create a company that is significant – not just for what it does, but for the positive contribution it makes to the community and it’s legacy.

“The (Otherside) brand is doing very well in WA and the success is a lot to do with how they’ve seated the product. We’re definitely looking at what we can be doing in the East Coast. We’ve got some ideas and we’re just going to formalise them.

“My expertise is in organisation, strategy and growth but I’m certainly a moderately excessive craft beer drinker. Rhys (Lopez, head brewer) is a very gifted brewer and I’ve learned a lot from him and I understand craft beer a lot better as a result. I think his methodology always seems to create a lovely product that’s interesting and really connects.”