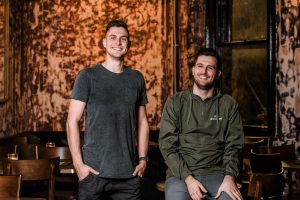 James and Josh Thorpe of Thorpe Hospitality have added a second venue to their portfolio.

Inner West pub The Oxford Tavern is located in Petersham and joins The Taphouse in Darlinghurst in the brothers’ pub estate. The Thorpes intend to build a microbrewery within the venue.

“The Oxford Tavern has been one of our favourite Inner West venues for a long time,” says James Thorpe. “The pub has a rich and colourful history in the area, and while we will be refreshing certain elements, it is really important to us that the pub retains its incredible charm.”

While the Thorpes have already reopened The Oxford Tavern, they are still working on some renovation works, while the brewery build is expected to take place over the 12 months or so.

“We will be after a very small system, probably 5-10 hec, a bunch of bright tanks (which will be mounted on the old stage the dancers used to dance on when it was a strip club), and oak barrels.

“We’d love to brew our own beer for the pub – ridiculous, commercially unviable beers that are tasty and a lot of fun. Everything from hazy to barrel-aged, sour and even smoked. The brewing label we’ve launched is called The Oxford Brewing Racket.”

“Be sure to wear your Hi-Vis,” says James Thorpe.

In addition, on Friday 25 January, the venue will be offering $5 schooners and $5 cans from 5pm at its Drain the Swamp Tap Extravaganza.

As well as offering its own beer, The Oxford Tavern will be focused exclusively on locally owned, independent breweries on tap, as well as introducing a wide range of craft options with a hyper local (within a 5km radius of the pub) focus.

The Thorpes will also focus heavily on restoring the pub’s famous smoker barbecue, and will be offering The Taphouse’s Sunday roast with a barbecue twist.

“We really want The Oxford Tavern to be inclusive and open to all,” adds James Thorpe. “The new Tavern will be a venue that doesn’t take itself too seriously – a fun, relaxing environment with fresh, local beer, great food and all-round good times for everyone.”