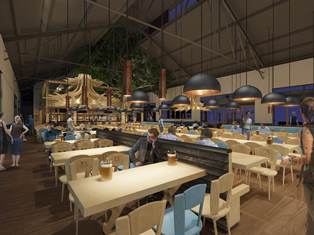 An artist’s impression of what Munich will look like.

Launching just in time for Oktoberfest, the bierhaus is the latest venture from the Urban Purveyor Group, which have a number of beer-themed venues such as the Löwenbräu Keller in The Rocks and nine Bavarian Bier Cafés across NSW and QLD.

While there’s no doubting it will be a party destination during Oktoberfest, Munich will launch with a nod to Melbourne’s sophisticated dining scene. Paying homage to all things pork, the menu features suckling pig, sourced locally from Riverlea and cooked over a charcoal spit.

Beer lovers can look forward to washing it all down with the venue’s very own signature Munich Lager, as well as a series of exclusively imported Bavarian beers. The Fürstenburg Premium Pils will be exclusively available at the venue, alongsideLöwenbräu Original, Stiegl Goldbräu, Franziskaner Hefe Weizen Hell and seasonal brews like Oktoberfestbier.

This is the second beer-focused venue to open in Melbourne recently withHophaus, a 350-capacity venue with more than 30 taps, opening in May.