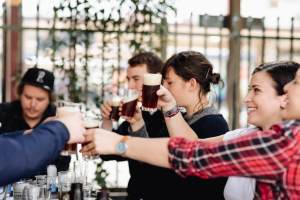 The eighth installment of Good Beer Week, which runs from 11-20 May, has unveiled its full program.

The festival, which will take place throughout Melbourne and regional Victoria, begins with the Good Beer Week Opening Party on Friday 11 May at the festival hub in Beer DeLuxe in Federation Square. Melbourne band Kahlua Breeze will be performing, while festival sponsors will provide the beer.

“Fed Square prides itself on being a meeting place that showcases the best of Melbourne,” comments Jonathan Tribe, CEO of Federation Square, where the Gala Showcase will be held. “We’re delighted to be working with Good Beer Week on the fifth iteration of this fantastic event and I encourage food and beverage lovers, and those who might be interested, to come along and take part.”

The festival includes many free events, but ticketed events are limited, with many likely to sell out quickly. Highlights include a sustainable shared table feast from Paul Wilson, Wilson & Market’s chef, who will be teaming up with Stone & Wood. Stone & Wood is also joining up with Darren Robertson, chef and owner of Three Blue Ducks in Byron Bay, to put on a six-course beer-matched degustation with sustainable produce in Melbourne.

Aaron Turner, The Age Good Food Guide’s Chef of the Year, will be serving his Nashville-inspired menu in Geelong and pairing it with a seasonal range from Blackman Brewery, while a winter feast will see food from SBS River Cottage Australia’s Paul West paired with beers from Stomping Ground at the Collingwood Brewery.

The musically minded can head to the Dinner & Show with Henry Wagons, where ticket holders will enjoy a two-course banquet matched with beers from The Public Brewery while enjoying music from the Melbourne entertainer.

The festival is split into sections including:

To secure your place visit www.goodbeerweek.com.au or download the Good Beer Week app.