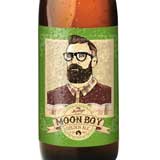 Murray’s Craft Brewing Co. has launched its first Golden Ale in the bottle, which brewery owner Murray Howe describes as “a beer for everyone”.

“We trialled the beer on draught at our own venue and are so pleased with the public reaction we committed to making Moon Boy more widely available in the bottle,” Murray said. “Moon Boy is a very drinkable, session strength Golden Ale for craft beer lovers, and also a great way for mainstream beer drinkers to explore flavour and start their craft beer adventure.”

Moon Boy has a very light German Pilsner malt backbone, with NZ-grown Pacifica hop providing a tropical fruit aroma, without too much bitterness. Tipping the scales at 4.5%ABV, it’s available from craft beer retailers around the country, or direct from the brewery website.