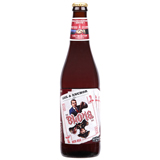 Fremantle brewers Sail & Anchor have teamed up with San Diego based Karl Strauss Brewing Company to produce a brand-new brew, called The Bloke. The red ale is the latest limited edition seasonal release from Sail & Anchor, which brewmaster Bill Hoedemaker says is “medium-bodied and toasty; and the combination of US and Australian hops gives it great aroma and lingering bitterness. Pour it into a glass to open up the nose and get a glimpse of that fantastic deep amber colour.”

The aroma, Bill says, is “reminiscent of the smell of butterscotch, hitting the nose with warm caramel and toffee notes.&rdqrdquo;

Karl Strauss’ Brew Master Paul Segura, who visited Fremantle to develop the collaboration adds, “The Bloke has a lot of those nice caramel-like flavours – toasty, nutty, toffee. How can you not like any of those flavours? That rich amber colour from the caramelisation looks delicious and will no doubt appeal to a broad audience”.

The brew has been put together using Ale malt, Melanoidin, Caramunich, Medium Simpsons Crystal, Naked Golden Oats, Cararoma and Cararye malts, along with Cascade, Galaxy, Ella, Chinook hops. Weighing in at 6.0% ABV with 60 IBU, The Bloke is available on tap at selected outlets and in Dan Murphy’s and BWS stores nationwide.