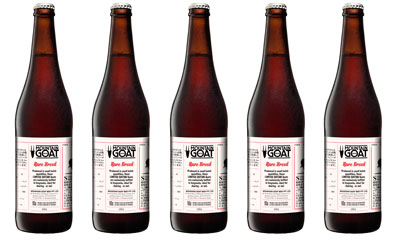 The brewers at Mountain Goat have recognised their merger with Japanese brewer Asahi the best way they know how, with a limited edition Rare Breed beer.

Aptly named Japanese Cowboy IPA, the beer is a blend of the brewers’ love of IPAs and Asahi’s Japanese heritage.

“It came about from us having a crack at merging a beer style we love (IPA) and bringing something Japanese to it (referring to our recent acquisition by Asahi),” Mountain Goat co-founder Dave Bonighton told Beer & Brewer.

“Sorachi Ace is a unique Japanese hop that delivers citrus/lemongrass character. It’s a pretty different take on a new world IPA. We then took it a step further and printed the label in Japanese. We’re pretty confident we got our grammar right.”

Japanese Cowboy IPA is a hophead’s dream, chock full of US hops Chinook, Simcoe and Columbus and dry-hopped late in the fermentation with the Japanese hop Sorachi Ace.

“It has a copper colour, balanced palate. Spicy, loaded with citrus character from the Sorachi Ace on the nose. It comes in at 7% ABV, 60IBU so it’s not for the faint-hearted,” Bonighton said.

Mountain Goat celebrated its 18th birthday last year, the same year it was acquired by Asahi. So how have things changed?

“From a brewer’s perspective not much has changed. We still get to wake up in the morning and make the beers we want to. I think Japanese Cowboy is testament to that!” Bonighton explained.

“If anything it will give us more time and space to make more interesting beers to drink alongside our staples like Steam and Summer Ale.”