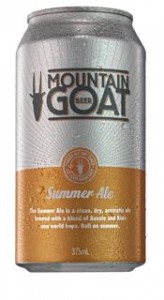 Victorian craft brewery Mountain Goat is stoked with its decision to can “a little bit of summer” for its fans.

Not simply content with canning an existing brew, the team has elected to add to their stable, brewing a Summer Ale that co-owner Cam Hines describes as “fresh, crisp and dry with a big hoppy flavour and aroma for supreme summerability”.

The Summer Ale is brewed using wheat malt, un-malted wheat, and a blend of new-world Australian and New Zealand hops including Nelson Sauvin and Motueka. The 4.7% ABV ale is packaged in a standard 375mL size cans and will be available shortly in retail and on-premise locations around the country.

While cans have always faced a level of opposition in Australia, they are the vessel of choice for American craft brewers and an increasing number of European craft brewers. Hines says that while they have been thinking about releasing cans for a while now, this year felt like an appropriate time to make the leap.

“We’ve always liked the idea of releasing a Goat in a can and this year the time seemed right,” he says. “Watching the explosion of cans in the US also helped us make the decision to go for it.”

Hines also reinforced that Mountain Goat believe that cans are “the perfect beer vessel for summer” due to their being lighter and better at preventing light-strike. Mountain Goat brewery is also known for its dedication to sustainability, and so the more recyclable nature of cans – as opposed to glass – was also an noted factor in the decision.