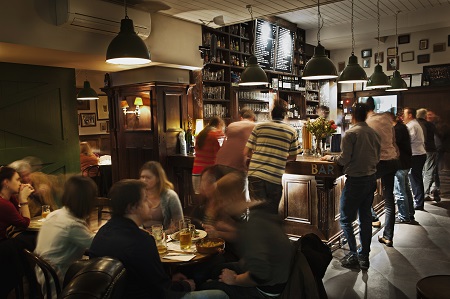 It is the first pub purchase for the brothers, who have worked in a variety of venues all over Sydney, including Newtown Hotel, The Arthouse Hotel in the CBD, and Gilroys Hotel in North Sydney. With the purchase of the Local Taphouse, a deal that was negotiated over four weeks with Greenstone through Blake Edwards at Ray White Hotels, the brothers have formed their own business, Thorpe Hospitality. They have pledged to keep the craft beer focus alive at the renowned venue.

“We are beyond stoked to be taking the reins at Darlinghurst’s revered Local Taphouse. We will be doubling down on the venue’s commitment to independent beer and breweries, and look forward to working closely with some of our good friends in the industry to bring Darlo locals the best that Australia and the world has to offer,” said Josh Thorpe.

Greenstone, who invited the Thorpes to the Sydney leg of GABS over the weekend, told Beer & Brewer that he knows the venue is in good hands.

“As one of the pioneer venues of the craft beer movement in Sydney, we’re thrilled that it is being taken over by people who are keen to continue the legacy of great, independent beer in Sydney. We couldn’t have asked for better custodians of the Taphouse than the Thorpe brothers and we wish them every success.”

Josh Thorpe is adamant that they will focus on craft beer, with some choice words for the bigger breweries.

“We do not and will not participate in the market-distorting practise of beverage rebates, currently in vogue with big breweries. We choose to support ‘independent’ and ‘craft’ – problematic and debatable terms to be sure, but we all know what they designate: a commitment to quality and inquisitiveness over cash flow and towering management structures.”

Instead, the Thorpes will split their beer list in two. Half of the taps will house craft beer staples like Stone & Wood, Lord Nelson, and Pirate Life; while the other 10 taps will be rotated regularly between more adventurous and limited beers – the idea being that craft beer drinkers want a bit of both.

“[We’ll have] all the weird, funky stuff that you want to try once, but then you can finish you’re night going back to what you normally love drinking.”

Thorpe Hospitality will take over operations of the pub on 7 July.