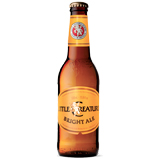 The major changes to the brew include the removal of Cascade hops from the mix, replacing it with Liberty and Crystal hops, which join Summer and Pacifica on the line-up. The malts have had small shake-up as well, with the team deciding on the addition of wheat to the malt grist to pump up the mouthfeel.

The packaging hasn’t escaped the changes, either – the updated brew now sports an old-school Little Creatures label on the bottles. The Bright Ale is available for consumers in 24x330ml and 12x568ml cartons, and 30L / 50L kegs for trade.

For more details, head to the Little Creatures website.