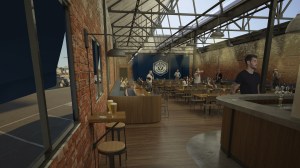 The team at Little Creatures Brewery Geelong has officially opened the door of its new event space, The Furphy Hall.

Nearly $80 mill has been invested in the development and growth of the old Valley MIlls site since Little Creatures took it over in 2013. This new space is the first part of a third stage of investment, worth an addition $1 million over the next three years.

The Furphy Hall will play host to comedy shows, live music, movies, markets and a variety of community events.

The Furphy Hall’ has been designed in collaboration with local architect 3iD and features the building’s original high light-filled ceiling, a multi-purpose kitchen, and every effort has been made to celebrate the history of the original building and to tell the Furphy story

Furphy has recently been rolled out nationally in response to overwhelming demand from publicans and punters far and wide, and so it only made sense to build Furphy a home of its own at its birthplace. Through ‘The Furphy Hall’, the community can continue to own and celebrate the beer from Geelong.

Furphy maintains a strong connection to the Geelong community, as a partner of Give Where You Live, Geelong Community Foundation and many other local not-for-profit groups. As Furphy’s presence is bolstered at Little Creatures, the site will be able to play an even bigger role in local fundraising efforts and supporting local community organisations and events.

The new venue is situated in a previously unused building in the middle of the site, and will cater to approximately 150 people at a time.